Apple is set to report its first-quarter earnings after Tuesday’s closing bell. As it readies, it’s dealing with the fallout of a bug on its FaceTime app that was allowing people to listen in on others’ conversations.

Not only did the bug make Apple look bad on Data Privacy Day, but it could have been discovered by a teen, whose mother tweeted relentlessly about the find as early as Jan. 20. Apple didn’t address the issue on its support site until last night.

This bug only aggravates Apple’s efforts to maintain its stellar image as it faces slowing sales of its flagship iPhone. The tech giant has had to admit that sales are under pressure for many reasons, including people not being as willing to pony up $1,000, or more, to buy one every year or so.

The Kid Who May Have Discovered the Bug

FaceTime allows people to make video calls with their iPhones, iPads, and Macs. This bug was allowing people to eavesdrop on others before that person answered the call.

It appears Apple was alerted about the bug as early as Jan. 20.

Someone using the handle anonymous MGT7 first tweeted about it.

My teen found a major security flaw in Apple’s new iOS. He can listen in to your iPhone/iPad without your approval. I have video. Submitted bug report to @AppleSupport…waiting to hear back to provide details. Scary stuff! #apple #bugreport @foxnews

FYI- I called, FB messaged, faxed, emailed and tweeted Apple exhaustively last week to no avail. Submitted official bug report also. Tried to keep it private b/c of the security concerns. Never heard from them.

MGT7 didn’t stop there. The person sent an email, too, and tweeted it yesterday.

My teenage son has discovered a major privacy flaw in your newest update that allows users to listen in on other individuals without their permission.

Apple began allowing group FaceTime users to communicate in a single call in an October 2018 update to its operating system (iOS). 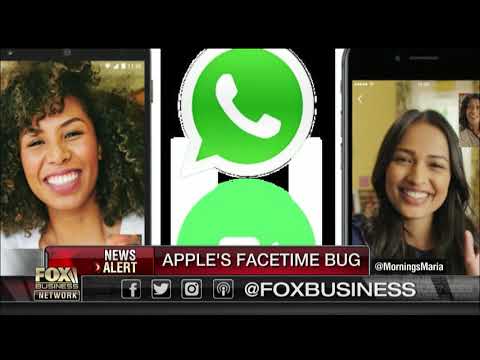 On its support site, Apple addresses the bug by stating Group FaceTime is temporarily unavailable. The post is dated Monday night.

That post came after many others had already discussed the bug. This includes the site 9to5mac.com. It noted that the bug poses a “pretty big privacy problem as you can essentially listen in on any iOS user.”

Although it still rings like normal, so you can’t be 100% covert about it. Nevertheless, there is no indication on the recipient’s side that you could hear any of their audio. There’s a second part to this which can expose video too[…]

Twitter founder Jack Dorsey quickly jumped to expose Apple’s big problem. He took to Twitter to also raise the red flag. He tweeted the following within minutes of Apple posting its note about the bug.

Ironically, the privacy issues related to this bug first came to light on Data Privacy Day. Pundits point out the irony that privacy was especially critical for Apple, which has long prided itself as on protecting users’ data.

Up until Monday night when Apple acknowledged the bug, observers were mainly preparing to hear just how much, or not at all, the iPhone maker’s slower sales had affected its top and bottom lines.

Earnings Whispers has the consensus estimate for Apple’s first-quarter earnings at $4.17 per share. It’s expected to report $84.1 billion in revenue.

Many market players had already lowered their own expectations for Apple. Doubts were raised after the company cut its quarterly revenue forecast. That caused its stock price to plummet. Cook had warned in a letter to Apple investors that emerging markets and the economic slowdown in China were presenting challenges.

While we anticipated some challenges in key emerging markets, we did not foresee the magnitude of the economic deceleration, particularly in Greater China. In fact, most of our revenue shortfall to our guidance, and over 100 percent of our year-over-year worldwide revenue decline, occurred in Greater China across iPhone, Mac and iPad.

This letter came on the heels of another unnerving one from Apple. In November, it announced that it would stop providing quarterly unit sales data for its products.

Here’s an excerpt from that statement:

Based on these estimates, our revenue will be lower than our original guidance for the quarter, with other items remaining broadly in line with our guidance. While it will be a number of weeks before we complete and report our final results, we wanted to get some preliminary information to you now. Our final results may differ somewhat from these preliminary estimates.

CCN.com reported that Apple analysts thought the worst could now be over for the tech giant’s stock. Apple’s recent recovery helped boost recent gains for the Dow Jones. However, its stock price has been on a downward spiral since October of last year when it was trading above $240 a share.