Uber stock is rallying after a better than expected fourth quarter. Here is why the stock will soon fall back to earth.

Uber (NYSE: UBER) shocked the market with better-than-expected fourth-quarter earnings and guidance. The cutting-edge transportation stock ended the day flat but is up more than 7.5% in pre-market trading.

Could this be the start of a phenomenal bull run for the embattled startup, or is Uber misleading investors?

Management claims that they will achieve their first quarterly EBITDA profit in the fourth quarter of 2020 and annual EBITDA profitability in the full year of 2021.

Here’s why those claims aren’t what they seem.

Once the most promising IPO of 2019, Uber stock cratered after its debut. Investors who bought the newly-listed stock were left holding the bag.

We later learned that Goldman Sachs and many of the rideshare company’s biggest early backers dumped vast amounts of the stock after it went public.

The reason for their pessimism is simple: massive losses.

Uber lost a staggering $5.2 billion in the second quarter and $1.2 billion in the third quarter of 2019. At that rate of cash burn, many investors fear the company may run out of liquidity and begin to dilute equity holders.

Management’s over-optimistic guidance hopes to put those fears to rest.

The fastest revenue growth came from Uber Eats and Uber Freight, which grew 70% and 75%, respectively. The company’s “Other Bets” segment, which includes the company’s electric bikes and scooters business, grew 189% to represent $35 million in revenue.

2019 was a transformational year for Uber and I’m gratified by our progress, steadily delivering against the commitments we’ve made to our shareholders on our path to profitability.

We recognize that the era of growth at all costs is over. In a world where investors increasingly demand not just growth, but profitable growth, we are well-positioned to win through continuous innovation, excellent execution, and the unrivaled scale of our global platform.

Khosrowshahi’s remarks sound optimistic. But the executive is just telling the market what it wants to hear. While Uber’s top line performed well in the fourth quarter, the company’s bottom line is still a disaster.

Uber lost $1.1 billion in the fourth quarter, which is a 22% jump from the previous year’s period loss of $889 million. Full-year losses come out to a staggering $8.5 billion.

With only $10.5 billion in cash on the balance sheet going into 2020, Uber’s management will be hard-pressed to continue sustaining these gigantic losses. Investors can expect severe dilution going forward.

Uber’s management hopes that by dangling “EBITDA profitability” projections to investors, they can distract the market from the company’s sizable and unsustainable net income losses. 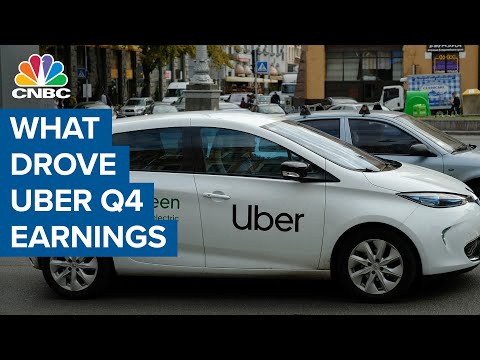 Investors shouldn’t take Uber’s claims seriously. Management is pumping Uber’s stock price by telling the market what it wants to hear. But they have made no meaningful progress towards achieving their goals of profitability.

Don’t forget Uber’s rapidly expanding stock-based compensation expense. It was only $172 million in 2018. but it has now grown to $4.6 billion – an insane growth rate of over 2,500% in a single year.

Could that be the real reason management is trying to boost the stock price?

There is nothing in Uber’s fourth-quarter result that justifies a rally in the stock. Expect shares to give back most of their recent gains.