America is burning. As the country emerges from pandemic lockdowns, riots have broken out in cities across the country to protest the death of George Floyd.

That wasn’t the first racially charged death of the year either. Back in February, Ahmaud Arbery was shot and killed while jogging in Georgia. Despite video evidence of his murder, it took until May for law enforcement to make arrests.

The peaceful protest era over this kind of brutality against minorities, best summed up by Colin Kaepernick’s “take a knee” approach at NFL games, is over.

This isn’t going away anytime soon. The Economist noted back in March that civilian protests have been on the rise in recent years.

And the implications are bigger than a few destroyed commercial buildings. Riots could seriously impact the economic recovery from the pandemic lockdown.

History as a Guide: How Riots Can Impact the Stock Market 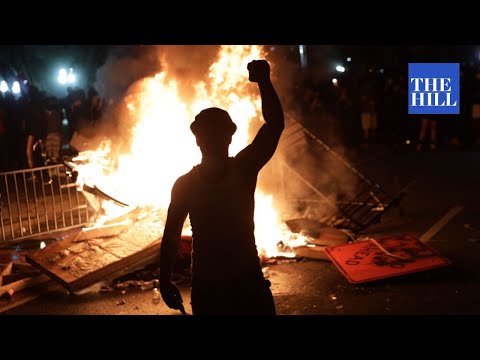 For now, markets don’t seem too interested in the biggest potential riots since the 1960s. But that could change… and quickly.

With a surge in protests and riots, there are a few points in history to compare markets to. The most pertinent is 1968.

Sure, protests had been building for years. But in 1968, following the assassination of Martin Luther King, Jr., the country boiled over.

At the Democratic National Convention in Chicago, riots broke out in the streets. While the police kept order and nobody was killed, the event has been dubbed a “week of hate.”

The stock market took it all in stride – at first. But as riots extended – causing economic damage from physical destruction and consumers staying safe at home – equity prices started to decline.

Stocks went into a bear market in December 1968.

Markets were coming off a long bull run back then, much like today. The 1960s were considered go-go years for stocks, with the Dow Jones more than doubling in that decade.

The similarities continue from there. It was also a time when market concentration became a concern, as most investors piled into a collection of large-cap growth stocks nicknamed the “Nifty Fifty.” Today, just a handful of big tech names dominate the market.

Following this decade of red-hot growth, poor performance plagued stocks for years. On an inflation-adjusted basis, stocks went nowhere between the big riots in 1968 and 1980.

Obviously, part of the recovery was hampered by the high interest rates and slow growth of the 1970s. But the bull market of the 1960s died when large, nationwide riots broke out.

How Today’s Problems Compare to 1968

The economy faces somewhat different threats in 2020 than it did in 1968. Future growth looks slow, and deflation is the immediate concern, not inflation.

Dissatisfaction with the status quo and fear of violence may keep consumers from spending as much in some sectors, even as pandemic lockdowns end.

History doesn’t repeat, but it rhymes. With large-scale national riots, we could be looking at a cool economy and moribund stock market for a long time.