For once, Elon Musk’s SpaceX wasn’t first. Over the past few years, SpaceX has been at the forefront of privatized space travel, beating competitors to send a spaceship into orbit, land the rocket back on earth, use a water-based landing pad— the list is exhaustive.

However, this week, the UK’s Richard Branson and his firm Virgin Galactic beat SpaceX to Wall Street. Virgin Galactic merged with Social Capital Hedosophia Holdings to sidestep the traditional IPO process, and debut for the first time on the NYSE under the ticker SPCE. 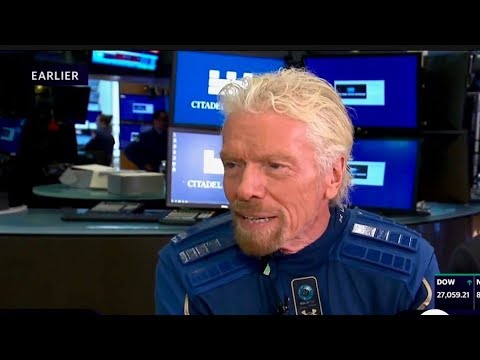 SPCE stock predictably made its way markedly higher on its first trading day as investors clamored to get a piece of the space tourism firm. Virgin Galactic was up as much as 9 percent on Monday, giving Branson a much-needed cash infusion to fund the company’s lofty goals.

SPCE is planning to begin taking tourists up to space next year for $250,000 per flight. So far, 603 customers have paid deposits and are awaiting news of the first launch.

SpaceX to Put Off IPO as Long as Possible

On some level, Elon Musk and his own space team must be jealous of Branson’s influx of investor funding— especially considering how well-received SPCE stock was. However, SPCE is likely to be the only space-exploration bet on Wall Street for the foreseeable future. Musk has been adamant that SpaceX will remain private for as long as possible.

There are a few reasons Musk doesn’t want investors involved. Chief among them, SpaceX COO Gwynn Shotwell said, is that it would muddy the firm’s vision of colonizing Mars. He worries that investor involvement would put too much focus on quarterly profits. That kind of investor control might eventually cause SpaceX to abandon its plans to put people on Mars and focus on more profitable tourist flights, as Branson has done.

There’s another reason SpaceX will likely remain private for the foreseeable future— government funding. Unlike Branson’s Virgin Galactic, SpaceX is tied up with the US government with several launch contracts. Going public could make it harder for Musk to secure funding from the US government due to increased transparency and the need to appease shareholders.

SPCE Stock Is Built for Profit

Virgin Galactic, however, is much better equipped to appease shareholders with its commercial spaceflight model. The firm is unconcerned about colonization and Mars, instead focusing on being the first to get paying customers into space. That goal, it turns out, looks achievable in a matter of months. SPCE says it will get people into space at some point in 2020. Even more appealing for shareholders is the fact that the firm expects to become profitable in 2021.

That seems doable as long as SPCE doesn’t run into any major roadblocks with its first tourism launches. The 603 person waiting list will likely grow after the first successful flight, and the $250,000 price tag will almost certainly rise.

SPCE is a High-Risk Stock

Of course, a bet on SPCE stock is a risky one. A lot can go wrong over the next year that could cause the firm to delay the 2020 launch further. Now that the company is public, investors will expect to see quarterly progress. Delayed launches could hurt SPCE’s share price, as would waning interest and advances from the firm’s competitors.

However, for now, SPCE is the only way an average investor can bet on commercial space travel while it’s still on the ground floor, so many appear to be willing to take those risks.