#TulsiMediaBlackout is trending on Twitter. Is the press really ignoring Tulsi Gabbard, or is it just an excuse for her poor poll numbers?
PHNjcmlwdCBhc3luYyBzcmM9Imh0dHBzOi8vcGFnZWFkMi5nb29nbGVzeW5kaWNhdGlvbi5jb20vcGFnZWFkL2pzL2Fkc2J5Z29vZ2xlLmpzIj48L3NjcmlwdD4KPCEtLSBUb3AgQXJ0aWNsZSBDQ04gLS0+CjxpbnMgY2xhc3M9ImFkc2J5Z29vZ2xlIgogICAgIHN0eWxlPSJkaXNwbGF5OmJsb2NrIgogICAgIGRhdGEtYWQtY2xpZW50PSJjYS1wdWItNjQ3MjA2OTY5MzY1NzE0MyIKICAgICBkYXRhLWFkLXNsb3Q9IjU4NDY0ODIyMjMiCiAgICAgZGF0YS1hZC1mb3JtYXQ9ImF1dG8iCiAgICAgZGF0YS1mdWxsLXdpZHRoLXJlc3BvbnNpdmU9InRydWUiPjwvaW5zPgo8c2NyaXB0PgogICAgIChhZHNieWdvb2dsZSA9IHdpbmRvdy5hZHNieWdvb2dsZSB8fCBbXSkucHVzaCh7fSk7Cjwvc2NyaXB0Pg== 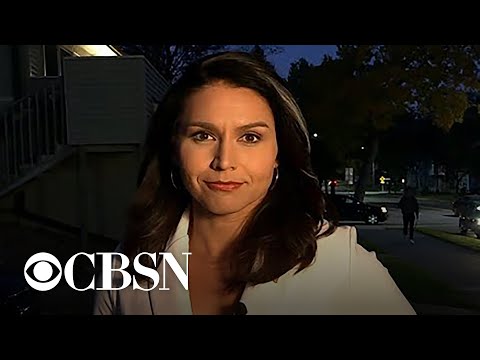 Starting late Friday night and building to a crescendo Saturday, #TulsiMediaBlackout is trending on Twitter.

The hashtag refers to claims by supporters of Hawaii Rep. Tulsi Gabbard that the media is sweeping her presidential campaign under the rug.

Their theory is that even the trend #TulsiMediaBlackout is the product of “Russian bots” and a Kremlin conspiracy.

This line of attack echoes comments about Tulsi Gabbard that Hillary Clinton made on a podcast last month. One of Tulsi’s supporters fired back.

He argued that Tulsi’s platform sets her further apart from the policies of Donald Trump than the rest of the Democratic field.

Another pointed out that the Russian interference conspiracy theory is full of holes. There is no credible evidence of a Tulsi Gabbard connection to Russia.

If there were, how could she pass the vetting process to be DNC Vice Chair? Or serve on the House Armed Services Committee?

Is there really a #TulsiMediaBlackout?

Tulsi Gabbard has consistently polled in the single digits throughout the 2020 Democratic Primary. So far, her numbers have trailed behind the three front runners– Joe Biden, Elizabeth Warren, and Bernie Sanders.

But she does hold a solid place in the middle of a crowded pack of contenders. And it turns out the corporate press doesn’t cover Gabbard in fair proportion to her poll, search, and social media numbers.

In June a study of the available data from Spectrym, the Vanderbilt News Archive, and Google confirmed a #TulsiMediaBlackout.

A self-described “Tulsicrat” crunched the numbers, but you can check them for yourself. And before anyone suggests this individual is a Russian bot, they have been on Twitter since December 2014.

Gabbard has also received the seventh most tweets during the most recent Democratic debate at the time. And the gap between media coverage and Tulsi Gabbard’s popularity may be widening.

At the end of October, a national survey by Suffolk/USA Today found Gabbard leading Sen. Kamala Harris by one point.

Tulsi Gabbard’s campaign gathered strength in the following two weeks. A YouGov/Hofstra University poll conducted in the middle of November placed her solidly fourth behind the three top-tier candidates.

Confirming a #TulsiMediaBlackout, 64% of respondents to a Quinnipiac poll released Nov. 18 said they “haven’t heard enough” about Gabbard to form a positive or negative opinion about her campaign.

Studies have found the establishment press has done more than merely snub Gabbard. When it does cover her, its coverage is overly negative.

In May, non-profit media researcher Fairness and Accuracy in Reporting (FAIR) said that reports on Tulsi Gabbard’s non-interventionist foreign policy platform “primarily use it to negatively characterize” her campaign.

After Tulsi Gabbard announced her presidential campaign earlier this year, NBC News published a hit piece claiming that Russian automatons were stirring up support for her campaign.

It was quickly followed by a bombshell revelation that NBC based its report on data from a firm that had already been caught faking Russian social media support for Roy Moore in the 2017 Alabama Senate election.

This shows a major lapse in editorial judgement at NBC News, to use such an ironically discredited source to build a political narrative against Tulsi Gabbard. Maybe #TulsiMediaBias will start trending next.

Meghan Markle Backed Clinton in 2016 – Is Her Next Endorsement Doomed?
September 2, 2020 No Comments

Hillary Clinton Is Launching A Podcast No One Will Listen To
March 1, 2020 No Comments

Bloomberg-Clinton 2020 Sends One Signal to Bernie Voters: ‘Screw You!’
February 15, 2020 No Comments
PHNjcmlwdCBhc3luYyBzcmM9Imh0dHBzOi8vcGFnZWFkMi5nb29nbGVzeW5kaWNhdGlvbi5jb20vcGFnZWFkL2pzL2Fkc2J5Z29vZ2xlLmpzIj48L3NjcmlwdD4KPCEtLSBSZWNvbW1lbmRlZCBwb3N0cyBBZCBDQ04gLS0+CjxpbnMgY2xhc3M9ImFkc2J5Z29vZ2xlIgogICAgIHN0eWxlPSJkaXNwbGF5OmJsb2NrIgogICAgIGRhdGEtYWQtY2xpZW50PSJjYS1wdWItNjQ3MjA2OTY5MzY1NzE0MyIKICAgICBkYXRhLWFkLXNsb3Q9IjI3MzY1ODYyMzUiCiAgICAgZGF0YS1hZC1mb3JtYXQ9ImF1dG8iCiAgICAgZGF0YS1mdWxsLXdpZHRoLXJlc3BvbnNpdmU9InRydWUiPjwvaW5zPgo8c2NyaXB0PgogICAgIChhZHNieWdvb2dsZSA9IHdpbmRvdy5hZHNieWdvb2dsZSB8fCBbXSkucHVzaCh7fSk7Cjwvc2NyaXB0Pg==