Most of the recipients of the nicknames that President Donald Trump regularly dishes come to learn of it from a distance. For Apple CEO Tim Cook though, it was different. Cook was sitting to Trump’s right when Trump referred to him as ‘Tim Apple’ during an American Workforce Policy Advisory Board meeting.

Trump was expressing his gratitude for the iPhone maker’s contribution to the U.S. economy when he said ‘we appreciate it very much Tim Apple’.

Social media users reacted to the gaffe by giving high-profile tech CEOs second names borrowed from the organizations they head.

Getting the whole gang together:

With one of Trump’s famous properties being Mar-a-lago Resort some users also took the opportunity to pay back the U.S. president.

This is not Trump’s first time to flub a CEO’s name, according to Business Insider. Last year in March at the White House, Trump introduced the CEO of defense contractor Lockheed Martin, as Marillyn Lockcheed. Her actual name is Marillyn Hewson:

We have some of our great business leaders, and leaders period right behind me. I may ask Marillyn Lockheed, the leading women’s business executive in this country, according to many.

Besides bungling CEO names, the U.S. president has flubbed the names of products and technologies. Last year in January in the presence of the Norwegian Prime Minister, Trump said the United States had sold Norway ‘F-52 jets’ made by Lockheed Martin, according to BBC:

In November we started delivering the first F-52s and F-35 fighter jets. We have a total of 52 and they’ve delivered a number of them already a little ahead of schedule.

In reality, Lockheed Martin makes no such jets. The F-52 plans only exist in the 2014 edition of ‘Call of Duty: Advanced Warfare’ first-person shooter game.

Earlier this year Trump referred to a non-existent wireless technology ‘6G’ while urging U.S. carriers to adopt it before the Chinese.

I want 5G, and even 6G, technology in the United States as soon as possible. It is far more powerful, faster, and smarter than the current standard. American companies must step up their efforts, or get left behind. There is no reason that we should be lagging behind on………

The U.S. president has also previously mistaken the names of countries. In 2017 while meeting with African leaders, Trump seemed to conjure a non-existent country named ‘Nambia’ whose healthcare system he praised: 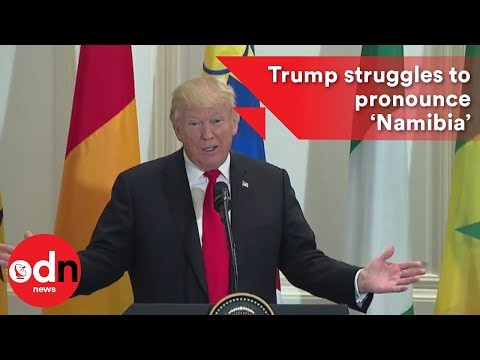 The White House later confirmed that Trump was referring to Namibia, according to XinhuaNet.

While Trump’s flubbing of technologies and the names of tech CEOs could be excused as normal human errors, one figure in the tech world stands out for having been given the same treatment as his political adversaries – a derisive nickname.

Earlier this year the CEO and founder of Amazon, Jeff Bezos was branded Jeff Bozo by the U.S. president. This was after the National Enquirer published intimate details of Bezos after he and his wife announced they were divorcing.

So sorry to hear the news about Jeff Bozo being taken down by a competitor whose reporting, I understand, is far more accurate than the reporting in his lobbyist newspaper, the Amazon Washington Post. Hopefully the paper will soon be placed in better & more responsible hands!

Bezos owns the Washington Post in a personal capacity after acquiring it for $250 million six years ago.