The S&P 500 Index declined sharply on Thursday and extended its slide into Friday’s session as Big Tech continued to slip. But the tech stock bubble is not bursting yet, and strategists believe it was a healthy pullback.

During the past month, economists warned against the widening gap between fundamentals and valuations.

Tech stocks in both the U.S. and China fell in tandem, and major investment bank executives say they expected pullbacks.

On September 1, Allianz chief economist Mohamed El-Erian said there are concerns about valuations shifting away from “economic fundamentals.”

In an op-ed column on the Financial Times, he said the extent of “risk-taking in U.S. financial markets” is hard to overstate:

Dramatic single-name surges (think Apple and Tesla) have amplified stocks’ continuous march higher, producing a series of records for the tech-heavy Nasdaq and the S&P 500 index, in particular.

Economists and strategists, including El-Erian, saw the tech stock pullback coming from a mile away.

After all, Apple stock has surged by over 60% year-to-date despite the pandemic, and Tesla stock has spiked 372% since January.

Whether Thursday’s pullback would cause a more protracted downtrend is uncertain, analysts argue. For now, some investment executives believe the tech sector saw a healthy correction.

Analysts explain the future of the U.S. stock market after Thursday’s steep selloff. Watch the video below. 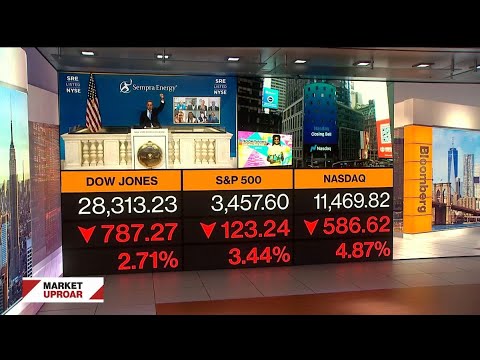 According to Hou Wey Fook, the CIO at Singapore’s banking giant DBS, it was a “healthy correction in an uptrend.”

Fook emphasized that the upward momentum is intact, especially considering the Nasdaq’s 70% rally since March.

We think it’s a healthy correction in an uptrend… Nasdaq has gone up 30% year-to-date, and from the lows in March, it has gone up 70%, so there will be bouts of correction.

Bahnsen noted that when something rallies 70% from its bottom, it is difficult to expect a prolonged correction.

The U.S. stock market’s overextended rally could lead investors to ponder about the probability of a deeper market drop. But the executive stated that there is no specific way to predict that an extended correction would start.

Even China Is Dropping Amid Institutional Selloff

On September 3, that is what happened. Institutions and their systematic selling likely overran retail investors.

Almost immediately after American tech stocks fell, Chinese giants, including Alibaba and Tencent, fell between 3.9% and 6.7%.

Craig said that in a “market fuelled by central bank largesse, economic surprises and record earnings [performance],” investors have to expect market corrections.