By CCN.com: Even prior to Apple delivering strong earnings that beat estimates, tech stock analyst Gene Munster said that Apple would rise 70% over the next two years. With today’s earnings announcement from Apple, it may initially appear that he’s right.

“There’s meaningful upside to the Apple story. I suspect that this year, Apple will be the best-performing FANG stock. I think this can be closer to $350.”

Tech stock guru Munster nailed the importance of services revenue to Apple’s stock. That division’s revenue grew about 18% year-over-year to $11.5 billion. Services now account for a third of Apple’s gross profits and more than 16% of revenue. He sees other divisions contributing to rising revenue.

However, a closer inspection of Apple’s earnings suggests that Munster’s prediction is dead wrong.

Apple’s stock is not seeing a gigantic bounce in after-hours trading; it’s up only about 3%. That’s likely due to the fact that product sales fell year-over-year by about 10%, to $46.5 billion.

For investors, this has been an area of ongoing concern. Apple’s stock was supported for many years by constantly issuing new iPhones. Consumers appear to be tiring of this approach and are purchasing fewer of them.

CEO Tim Cook elected to stop breaking out iPhone volume in the quarterly earnings report, which is usually a sure sign that growth has tapped out. iPhone sales revenue fell to $31 billion from $37.6 billion in last year’s comparable quarter.

Mac sales also fell about 4.5% to $5.5 billion, while all other categories saw increases.

Battle of the Analysts Over Apple’s Lackluster Stock

Also of some concern is that international sales now account for 61% of sales. American usage of Apple products may be faltering.

Despite the big bump in services revenue, Apple’s stock likely isn’t soaring because of some of these headwinds. CNBC guests had conflicting opinions: 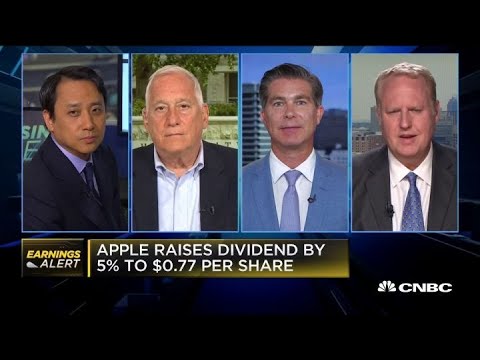 Apple’s stock has increasingly been driven by services revenue and by subscription revenue. It seems that Munster’s prediction is going to be difficult to support, looking at these recent numbers from AAPL.

To get to a $350 AAPL stock price, it would suggest that Apple would deliver roughly 35% earnings growth over each of the next two years. How can the company possible hit this kind of skyrocketing growth when earnings just fell by 10% over last year?

It first means that the rate of decline in Mac and iPhone sales will need to slow, which seems unlikely. In addition, increases in service and wearables revenue will have to vastly exceed what Apple earnings just delivered – about 16% growth.

That seems extremely unlike given that the entire market is overdue for a major correction.

Apple Stock a Buy? Only for the Brave

Is AAPL stock a buy right now? With $130 billion in net cash, Apple’s stock trades at a market cap of $855 billion.

Investors should be cautious about buying a stock when the P/E ratio exceeds the long-term growth rate. Tech stock analyst Munster’s prediction of $350 is crazy. $150 is more likely.