In a rare display of support for Donald Trump, Senator Bernie Sanders, who is also a 2020 presidential candidate, said he has no problem with Trump’s attempts to negotiate with North Korean leader Kim Jong Un.

I have no problem with Trump negotiating with Kim Jong Un. But while he's meeting with Kim, he's pushed us to the brink of war with Iran, and kept us in the horrific Saudi-led war in Yemen.

Sanders did include the caveat that he was deeply concerned over U.S. involvement in Yemen and the escalation toward war with Iran. Nonetheless, with many democratic onlookers extremely concerned about Trump’s humanization of North Korea’s authoritarian leader, Bernie Sanders is distancing himself from the rest of the pack with these comments.

It was great being with Chairman Kim Jong Un of North Korea this weekend. We had a great meeting, he looked really well and very healthy – I look forward to seeing him again soon….

Trump/Sanders Overlap Unsurprising Given Voter Base

Setting himself apart from the mainstream Democrats is not unusual for the U.S. Senator from Vermont. Sanders is an independent who caucuses with the dems. On the liberal to conservative scale, he is further to the left than many of his 2020 competitors. Due to the spectrum of ideology, as he leans hard-left, he has some overlap with some working class, right-wing voters that support Donald Trump. The result of this is we see him praised by anti-Democrat voices like Ann Coulter and occasionally cheered on Fox News. 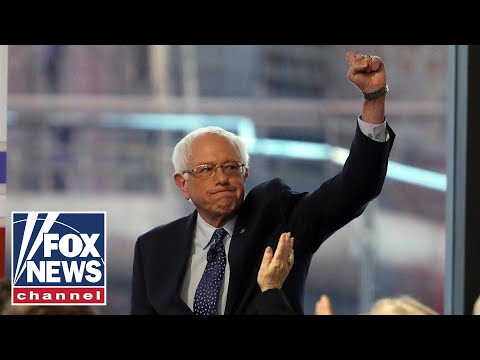 Bernie Sanders is walking a tightrope, as his campaign knows that he can flip many in Trump’s key base. However, he also does not want to alienate Trump-hating lifelong Democrats. For this reason, Sanders will take any opportunity where he agrees (even partially) with Trump’s approach to praise the president. To keep his leftist supporters on board, he will often follow up that praise with several caveats. This strategy helps to keep him looking authentic and independent to his voter base.

A classic example of Sanders/Trump crossover is the subject of U.S. manufacturing. The Senator has spoken of at least partial support for Trump’s hard line on China and other nations where low wage conditions reduce the competitiveness of U.S. workers. The following is from a 2018 press release from Sanders:

“I strongly support imposing stiff penalties on countries like China, Russia, South Korea and Vietnam to prevent them from illegally dumping steel and aluminum into the U.S. and throughout the world.”

Naturally, he included an anti-Trump caveat to go along with the subtle praise,

“If Trump were serious about protecting good-paying American jobs, he would sign an executive order today to prevent large companies that outsource jobs to low-wage countries from receiving lucrative federal contracts and corporate welfare.”

Donald Trump Likes Both the Carrot & the Stick

Negotiating with U.S. adversaries is a strategy that Trump has rejected and embraced in equal measure. The president shunned negotiations with Iran in favor of escalating tensions while pursuing precisely the opposite approach with North Korea. Trump has also used both these strategies, ramping up tariffs or sanctions on China and Russia while at the same time portraying a friendly public image with both Xi and Putin.

Harris & Biden to Go After Bernie Sanders on Trump Praise

It would not be surprising to see Bernie Sanders take severe heat for his support of North Korean dialogue. You can be sure that the teams of moderate Democrats like Joe Biden and Kamala Harris will be preparing to go after the senator from Vermont on these bipartisan controversies.