By CCN.com: Walmart held its annual shareholder meeting on Wednesday. Normally these are dry events, but Bernie Sanders brought plenty of drama to this year’s edition. Sanders showed up, in person, to make his demands clear. These include a minimum wage of $15 for all Walmart employees and putting hourly workers onto the company’s board of directors.

Sanders has made no secret of his anti-Walmart views in the past. He criticizes the Walton family for earning $25,000 per minute while employees earn just $25,000 per year. Earlier this year, he called the Waltons “Faces of Greed.” 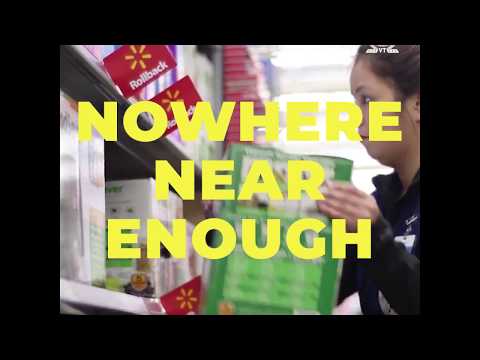 In an interview with CNN, Sanders said about Walmart employees:

“They cannot simply be cogs in a machine. To be a human being means that you have some ability to control your life. And that includes your work life.”

Walmart offers a minimum wage of $11 per hour at the moment. Additionally, counting other benefits and bonuses, the company says its average wage is greater than $17 per hour. But Sanders says that this is still unacceptably low. And activists note that rivals such as Target and Costco pay significantly more than Walmart.

Ro Khanna, who served in Obama’s Commerce Department, summed up the argument for a higher minimum wage:

In recent years, the economy has been booming. But even with the unemployment rate near record low levels, the prosperity hasn’t necessarily helped most ordinary Americans. Rising stock prices aren’t a panacea either. As Democratic presidential candidate and crypto supporter Andrew Yang declared, the stock market is a flawed measure of how people are doing financially:

Contrary to what you might expect, Walmart didn’t totally reject Sanders’ sentiment. CEO Doug McMillon agreed that the federal minimum wage was “too low,” adding:

“Time for Congress to put a thoughtful plan in place…It’s clear by our actions and those of other companies that the federal minimum wage is lagging behind.”

Walmart isn’t acceding to Sanders’ more specific demands though, and the company’s stockholders will surely vote down Sanders’ proposals.

Some folks were upset with Walmart’s response. One analyst asked:

“Who made Bernie Sandinista the CEO of Wal Mart?”

Conservative and libertarian critics say Walmart is being deceptive. At the same time Walmart demands a higher federal minimum wage, it is bringing in thousands of robots to replace low-paid human workers. Walmart has money for a huge automation push, but, skeptics counter, its smaller rivals will be forced to shut down. Furthermore, minimum wage laws might not even be good for workers. One minimum wage opponent laid out the argument:

Despite the minimum wage controversy, investors were in a cheerful mood following the annual meeting. Walmart stock rose almost 2% to reach its highest level since November.