Ford reported an adjusted operating loss of $1.9 billion in the second quarter, much better than the $5 billion loss expected.

The stock’s short-lived rally before the results got sold after earnings came out.

Meanwhile, keen buying interest from Robinhood traders has propelled Ford to the top of the highest traded stocks on the platform.

Ford has reported a war chest of cash and marketable securities at $39.3 billion, which might seem pretty decent, but there is a lot more to it than meets the eye.

There is a real possibility that Robinhood traders might be left holding the bag when Ford goes under, and here’s why.

Ford’s Debt Continues to Grow and Get More Expensive

Ford Motor Company’s newly acquired cash hoard is twice its minimum cash balance target of $20 billion. However, most of it is a high-interest debt that Ford secured to survive the pandemic.

Back in 2006, then-CEO Alan Mullaly managed to secure $23.6 billion in debt, which helped the company escape bankruptcy. Eventually, Ford escaped by the skin of its teeth by borrowing another $5.9 billion in 2009. The massive obligation still haunts the company to this day.

As Charles Elson, director of the Weinberg Center for Corporate Governance at the University of Delaware, rightly points out,

The fact that Ford Motor Company, a multibillion-dollar company, finds it necessary to defer loan payments of that size is concerning.

Indeed, those are small payments compared to the colossal amounts Ford has racked up so far this year.

This debt will get more expensive, and raising more money will prove difficult as Ford’s credit rating continues to sink.

The enormous junk-rated debt is a ticking time bomb.

The Blue Oval Is Bleeding Cash Amid Depressed Sales

Ford has a negative cash flow of $5.9 billion, and its reported sales have dropped significantly because of the coronavirus-induced shutdown.

After shutting down entirely in March, Ford had just got back to pre-COVID-19 production levels. Now, it looks like another shutdown could be right around the corner.

The question remains: Will Ford be able to raise enough junk-rated high-interest debt until then? 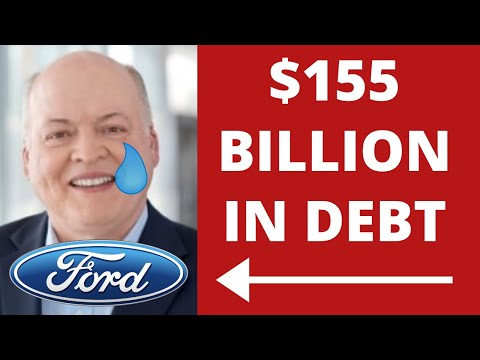 Ford expects big things from the Mustang Mach-E, new F-150, and the new Bronco, but the ongoing recession will weigh on sales, and lockdown 2.0 will take a toll on production capacity.

The debt bomb is ticking for Ford. When it goes off, it will take down new investors who have faith in the company.