Thanks to a Florida judge, the lurid sex tape of Robert Kraft — the billionaire owner of the New England Patriots — will remain sealed. At least for now.

Many people breathed a collective sigh of relief at the judicial act of mercy on the public. Because we don’t want to see it.

On April 23, Palm Beach County Judge Leonard Hanser sided with Kraft’s attorneys, who have filed motions to keep the evidence under seal (see news story below).

This week, Kraft’s lawyers argued that releasing the X-rated video of the 77-year-old widower receiving oral sex at a massage parlor could hurt his chances for a fair trial. 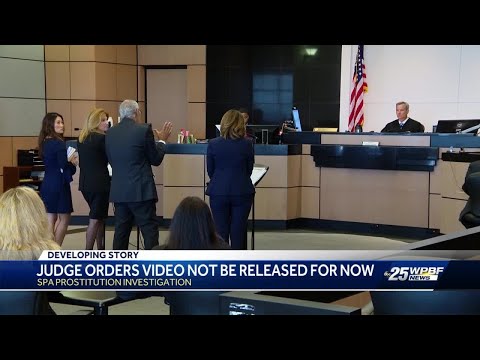 As CCN.com reported, Kraft pleaded not guilty to two misdemeanor charges of soliciting prostitution at a Florida massage parlor in January 2019.

He faces up to a year in jail if convicted (although that is highly unlikely). He will also be required to complete 100 hours of community service, and attend a class on prostitution.

In March, Florida prosecutors offered to drop the charges if Kraft admitted that he would’ve been found guilty at trial. However, Kraft balked at the deal, saying he will not admit guilt for a crime he didn’t commit.

No One Has Been Charged With Human Trafficking

The media have made a circus of Kraft’s arrest because prosecutors initially claimed it was part of a massive “human trafficking” sting operation.

However, no one has been charged with trafficking. Moreover, police say the massage therapists were not held against their will and were free to leave anytime.

Furthermore, there’s no evidence that Kraft suspected that the masseuses he solicited could hypothetically have been trafficked.

So basically, Kraft’s arrest was hyped in the media even though it was merely a simple prostitution bust (which happens every day).

In his statement, Kraft did not admit any guilt to the two-count misdemeanor charges pending against him.

Moreover, his attorney, William Burck, underscored that Kraft’s case has nothing to do with human trafficking. A furious Burck also accused Florida law enforcement of obtaining evidence illegally.

“There was no human trafficking, and law enforcement knows it. The video and the traffic stop were illegal. Law enforcement just doesn’t want to admit it.”

“The state attorney needs to step up and do the right thing and investigate how the evidence in this case was obtained.”

One sheriff who has seen the videos warned that they are “explicit, sexual, and graphic.”

Sex Work Should Be Decriminalized

All the hypocritical pearl-clutching surrounding this ridiculous episode underscores why prostitution should be legalized.

As CCN.com reported, research suggests that decriminalizing prostitution would help the women who engage in sex work by making it safer, improving their access to healthcare, and curbing human trafficking by cartels.

What do we want?

Prosecuting a mild-mannered septuagenarian with no prior arrests does not make the streets any safer for the general public.

In fact, most people would agree that police resources are better spent pursuing violent criminals such as murderers, rapists, and child molesters. Don’t you agree?