By CCN.com: An analyst at vaunted investment bank Morgan Stanley made himself look like the village idiot Monday, saying America’s economic outlook is crumbling toward recession even as the economy booms.

The U.S. Economy Is on ‘Recession Watch’

Chief U.S. Equity Strategist Michael Wilson spit out several data points while warning in a report that the U.S. is now on “recession watch.” He stated:

“Recent data points suggest U.S. earnings and economic risk is greater than most investors may think… The U.S. economy is vulnerable to a more significant slowdown due to overheating last year from the fiscal stimulus. This led to labor cost pressures for corporations, excessive inventories, and an overzealous capex cycle that is now reverting to the mean, which means well below trend spending for several quarters.”

The chart is partially derived from manufacturing activity, which hit a nine-year-low this month thanks to a slowdown in the services sector.

Economists point to the services sector as an indicator because healthcare and business services are utilized frequently by Americans. If those are slowing, then it means Americans are spending less money for those services.

Wilson pointed to an ongoing yield curve inversion in which the longer-term 10-year Treasury yields less than the 3-month Treasury bill, which typically signals a recession.

Wilson has also been sounding the economy and stock market alarm for some time now: 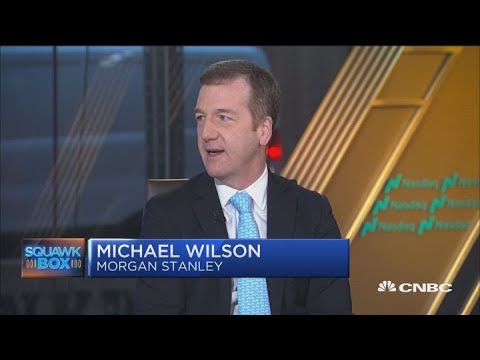 It Isn’t All Doom and Gloom, Not Even Close

Morgan Stanley is ignoring the plethora of opposing data.

Rival investment bank JPMorgan puts the risk of recession at only 15%. Its CEO Jamie Dimon does not see a recession in 2019.

“I would not look at the yield curve and its potential inversion as giving the same signals as in the past…There has simply been too much interference in the global markets by central banks and regulators to understand its full effect on the yield curve.”

What Recession Watch? The U.S. Economy Is on Fire

JPMorgan’s Dimon points to ongoing robust GDP growth, which is averaging 2.9% since Donald Trump took office and reached 3.2% in Q1. Global GDP growth has been stable since the end of the financial crisis.

Jamie Dimon believes the trade dispute with China will be resolved favorably. The labor market has been on fire, with more than 20 million jobs added since the bottom of the financial crisis.

That’s given a kick to wage growth, which had been stagnant for years and is now exceeding 2.5% annual growth.

This has led to steady increases in personal income, which in turn has goosed the U.S. Consumer Comfort index.