By CCN.com: Don’t say we didn’t see it coming. John McAfee is not unveiling the true identity of bitcoin creator, Satoshi Nakamoto, at least not today. The mercurial tech maverick has put a stop to proceedings, alleging that due to an “imminent” extradition request to the United States, McAfee’s attorney believes outing Nakamoto to the world could be too dangerous for his client.

Our initial coverage suggested that McAfee might decline to reveal bitcoin’s father using the excuse of damage to the cryptocurrency community. In a rather amusing development, Fundstrat’s Thomas Lee felt the need to weigh in on this hilarious situation, seemingly suggesting that revealing Satoshi’s identity would hurt the BTC price, the community, or both.

Lee’s need to legitimize this saga was notable, but he wasn’t the only one adding fuel to this fire.

McAfee Tells Bloomberg Satoshi Nakamoto “Is Not A Happy Camper”

Marketing and politics go hand in hand. McAfee is likely going to make a run at the U.S. presidency. Skeptics and non-skeptics alike might suggest that the Satoshi talk is nothing more than a way to keep his name in the spotlight. In another extremely amusing happenstance, Bloomberg (probably in desperation to get clicks out of a wasted interview) released some glorious quotes from an interview with the cybersecurity entrepreneur that one can only describe as prime McAfee:

“People forget that I am a technologist, I am one of the best. My entire life I’ve been tracking people who are the best in the world at hiding their identity. Finding Satoshi was a piece of cake for me.”

Don’t worry there’s more. Big John claims that he has actually spoken to Satoshi, and the “technologist” has struck a nerve with the bitcoin creator:

“I’ve spoken with him, and he is not a happy camper about my attempt to out him.”

It’s pure gold; the fact that only two short quotes were useable for Bloomberg’s article is even more amusing. This has been fun while it lasted though, and you can’t deny the conviction that the security guru displayed. 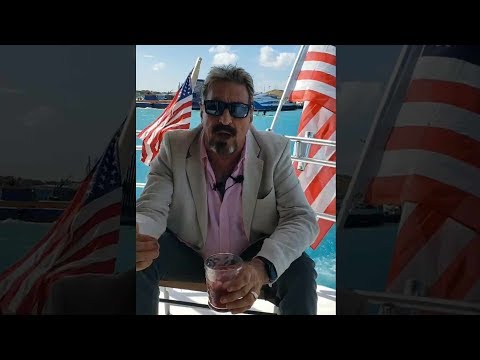 Bitcoin Creator in Exchange for the Presidency?

Maybe during his election campaign, McAfee could run on the promise that he does reveal the identity of Satoshi Nakamoto. Only as president would the Bahamian resident feel safe enough to return to the U.S. and perform the unmasking. Has anyone ever run with the “I’ll tell you a secret when I’m president” angle?

Perhaps the grain of truth in all of this is that McAfee could very well be facing some legal proceedings that could lead to his extradition. Several high-profile cryptocurrency promoters and advocates faced lawsuits after the ICO boom.

Yes, this whole storyline was never going anywhere, but the bitcoin bull still got Bloomberg to run a legitimate story on his claims. It’s very obvious who won this round.

Ultimately, this quote best sums up the “Satoshi countdown” saga,

“If you own the facts, you may distort them as you like.”- John McAfee