Kyle Rudolph was basking in the afterglow of the biggest catch of his nine-year NFL career.

Some short time earlier, the veteran tight end gave the Minnesota Vikings an improbable overtime victory over the New Orleans Saints by high-pointing a jump ball in the end zone. Their stunning victory sent the underdog Vikings to the second round of the playoffs, where they’ll meet the top-seeded San Francisco 49ers on Saturday afternoon. 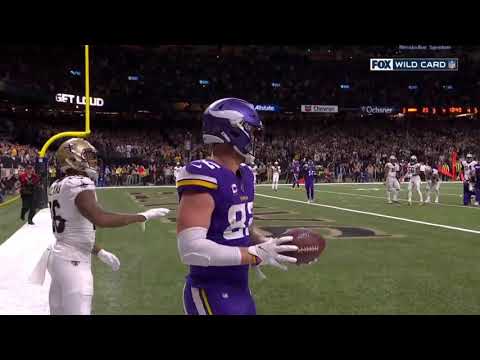 When a reporter asked Rudolph for his gloves in the post-game locker room, it’s safe to say he was happy to oblige. As Rudolph understood it, his touchdown-catching gloves were to be sold at an upcoming charity benefit.

But a few days later, Rudolph realized that the reporter in question did something much worse than crossing the line of media etiquette for philanthropic purposes.

On Wednesday afternoon, a Twitter user posted a screenshot of Rudolph’s gloves from last weekend’s game being auctioned off on eBay. Rudolph quickly responded, setting the story straight on how his gloves were made available for public sale.

It wasn’t some enterprising, cash-needy fan who put his gloves up for auction. As Rudolph clarified, it was the reporter insisting they would use the gloves to raise money at a charity event who broke his trust.

It’s not even an unwritten rule that credentialed reporters refrain from asking players for autographs and photos, or engage in other behavior befitting of fans. NBA guidelines, for instance, explicitly state that autographs are not allowed during media access periods. The league is so strict when it comes to credential use that it has even stripped reporters of their credentials who break the rule of posting a photo of it on social media.

The bold line that separates a credentialed reporter from a fan, basically, is not unlike that which separates conduct at any workplace from that outside of it. Not only does the reporter who put Rudolph’s gloves up for auction give all media members a bad name in the eyes of players, but it’s borderline tantamount to theft.

Sports writer Marc Morehouse of The Gazette said it best.

Rudolph was disappointed and other reporters are angry. But hurt feelings, it turns out, ended up being the worst outcome of this ugly situation.

Why? Jason King, the eBay user who bought Rudolph’s gloves for a few hundred dollars, caught wind of the ordeal on Twitter and responded in the best way imaginable.

King is donating the gloves to Rudolph’s charity of choice, a local children’s hospital. In return, he’ll also receive the pair of gloves the Vikings star wears against the 49ers on Saturday.

Regardless, here’s hoping Rudolph does what he can to ensure the reporter who “stole” his gloves has their credential revoked indefinitely. There’s no place for reporters to ask the players they cover for any personal benefit, especially under the guise of philanthropy.