The Rock’s purchase of the XFL may have breathed new life into the football league, but Johnny Manziel could legitimize the entire operation.

The XFL is officially back in business after Dwayne “The Rock” Johnson and an investment group announced that they had purchased the alternative football league from The Rock’s former WWE boss, Vince McMahon, in August. But as the organization has suffered through two failed launches already, Johnson and his team need to make a major play to ensure that the third time is truly the charm.

What they need is the one thing the XFL has never had — legitimate star power.

This is why The Rock needs to throw some serious money at former Heisman Trophy winner Johnny Manziel.

On Saturday, TMZ Sports shared a video of one of its reporters catching up with Manziel outside of the Saddle Ranch Chop House in Los Angeles. He asked the former Texas A&M star him specifically about a possible return with the XFL, but “Johnny Football” was quick to say that he was retired, a point that was reiterated throughout the impromptu interview.

However, Manziel did express his clear belief that The Rock could turn the resurrected XFL into a big success, stating:

“Listen, anything The Rock touches is going to be gold as always.”

And when pressed by the reporter about whether or not he had any aspirations to return to the gridiron at all, Manziel was quick to answer, “Never say never.” Jim Carrey’s famous line from “Dumb and Dumber” — “So you’re telling me there’s a chance” — instantly comes to mind.

When the first version of the XFL was launched in 2001, it was one of the better examples of a hot mess you’ll ever see. The quality of play was bad, the rules were weird, and the overall presentation and TV broadcasts took too many cues from the wrestling promotion that essentially birthed it. Things were different the second time around, though.

The most recent iteration of the league actually introduced some unique new concepts, i.e. eliminating PAT kicks in favor of scrimmage plays with alternating values based on distance, “shoot-out” style overtimes, and unprecedented access to the huddle, coaches, and coordinator’s booth throughout game broadcasts.

But despite all the great strides the league made in terms of play quality and presentation, it lost something that the original XFL had in spades — personality. It didn’t have star power or a legitimate draw to capture the imagination of fans and media alike. In other words, there was no big name to put up on the proverbial marquee, and while Johnson will provide some level of gravity for the rebooted league, he can’t go out and be a star on the field.

Manziel, on the other hand…

After he washed out of the NFL, Manziel eventually found his way north of the border. In 2018 he took the field for the CFL’s Montreal Alouettes. Although he struggled initially and there was a clear adjustment period due to the CFL’s unique rules, he showed marked improvement throughout the campaign and finished the year with an impressive completion percentage of 64.2 and a yards per pass average of 7.8.

Here’s a look at Manziel in action during one of his starts with the Alouettes: 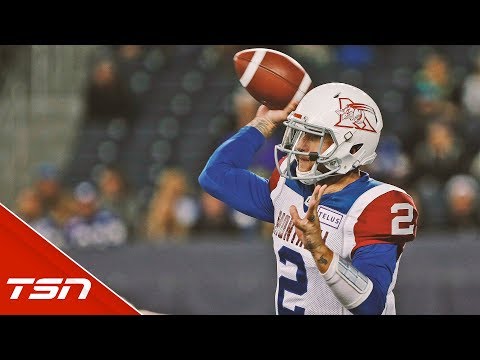 The more important numbers, though, were the television ratings he generated.

Manziel’s CFL debut was watched by an average of more than 400,000 people, which made it the most-viewed game broadcast in the history of the league. And while the XFL performed relatively well in the rating during its opening week, the numbers dwindled well before COVID-19 essentially shut down the league. A proven draw like Manziel could help ensure the XFL retains its viewership this time around.

He may be a hot mess at times himself, but there’s no doubt that Manziel brings excitement on and off of the football field. For an organization looking to generate some excitement of its own, he could be worth a sizable investment from Johnson and the XFL’s other investors.

Ryan Aston
Ryan Aston is a United States-based digital journalist and editor with extensive experience on a variety of beats. He has covered politics, trending social media personalities, sports and entertainment for Inquisitr, gaming news and film/TV for ScreenRant and NBA basketball and the Utah Jazz for FanSided, RantSports and Bleacher Report. His work has also been featured by Fox Sports and USA Today. Contact him at ryan@purplemountainpost.com, see his LinkedIn profile here.
Subscribe
0 Comments
Inline Feedbacks
View all comments
← PreviousShaquem Griffin Waived Saturday by the Seahawks — I’m Depressed
Next →Jadeveon Clowney Signs Deal With Titans — He’s Worth the Wait

Time to Jump on the Josh Allen Bandwagon?
Travis Pulver