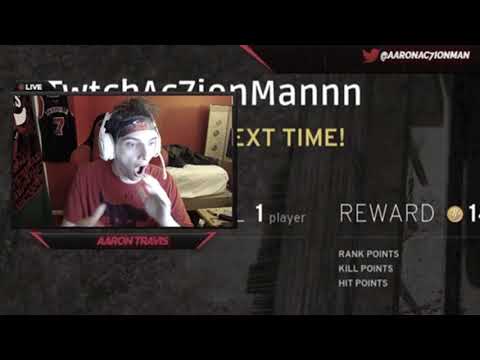 His addiction had become so extreme that at one point in 2012, Travis decided to steal Axe shower gel bottles from a drugstore with an accomplice to fence them later.

While the Twitch streamer managed to block a security camera, the duo failed to notice a second CCTV device that had recorded the crime, resulting in a police officer arresting them.

After their plan went awfully wrong, the Fortnite streamer ended up in jail for five months, according to a Chicago Tribune article.

Travis went through intensive rehab after escaping a “lucky” drug possession case in 2016. That’s when he decided to launch his professional Twitch channel.

With an average daily broadcasting time of 11 hours, Travis has grown his Twitch channel to 37,500 followers. He usually streams Fortnite, Halo The Master Chief Collection, and Halo 5 Guardians.

“I just knew I wanted a change and hearing my whole life I had potential, and finally having an outlet or [somewhere] I can see what people are saying the whole time was a pretty rewarding feeling,” ac7ionmannn stated in a Fox32 interview today.

Here is the interview that was on Fox News. Thanks everyone who supports me everyday and allowed this to happen. ❤️ https://t.co/SyXPAG0smi

But the Fornite streamer doesn’t stop at playing games. He wants to take advantage of his follower count to help people with addictions.

“And me being open about my story, it’s been able to help me get past Twitch and video games. I’ll talk to people and I’ll be able to tell me I’ve inspired their loved ones to go to rehab or they’ll change their opinion on addiction,” he stated in the interview.

As a future goal, the Fortnite streamer wants to deliver motivational speeches and serve as a “voice” for the loved ones of addicts.

“I feel an obligation because I feel very grateful to be given this second chance to from life to help people out. So I’m obligated to help as many people as I can and be a voice for people who have lost someone in addiction or know someone going through it,” Travis said.