Fortnite is an insanely popular franchise. Walk down any toy aisle across the world and you can’t escape it. Not just in the real world, but every social media channel from Twitter to YouTube is filled with the game. It seems like Fortnite is as ubiquitous as Minecraft, or at least very nearly.

Regardless of how you personally feel about the game, it is hard to deny its cultural impact.  Everyone has heard of it, to the point that grandparents now refer to it as ‘The Fortnites,’ to the eternal guffawing of their offspring’s offspring. Having said that, it seems like Fortnite’s crown may not be as stable as it seems.

Fortnite Lost A Lot of Revenue This Year

Back in 2018, Fortnite managed to rake in an impressive $2.4 billion, according to The Hollywood Reporter. It is this massive influx of cash that has allowed the company to pursue the Epic Games Store so aggressively. The issue is that over the course of 2019, Fortnite only brought in $1.8 billion, a drop of 25%.

Of course, $1.8 billion is still a lot of money, but the drop should be worrying Epic. Having to bankroll their expensive storefront expansion while losing revenue on their top earner could really spell disaster for them, especially since this isn’t a symptom of a wider loss in revenue.

In the same report from The Hollywood Reporter, it was revealed that digital game spending was at its highest point ever. Overall, $109 billion was spent on digital games this year alone, breaking previous records. Money is still being spent wildly on digital products, but less is being spent on Fortnite, which points to a problem with Fortnite itself. 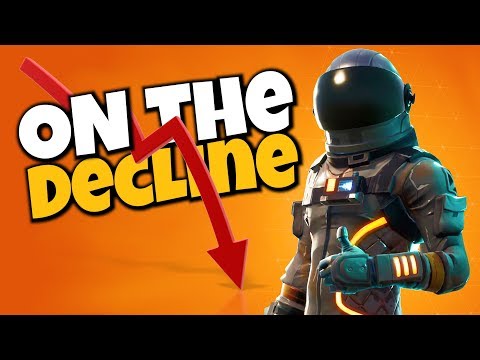 Is This a Fad Running Out of Steam?

Despite having lost a considerable portion of their revenue, Fortnite was still this year’s top-earning game. The issue is more than likely due to a much broader market. Games like Call of Duty mobile and Apex Legends have almost certainly cut into Epic’s business. As if that wasn’t bad enough, Fortnite has been losing viewers as well as losing money.

Epic will need to really do something special with Fortnite if they want it to remain relevant in a diversifying market. They cannot rely on the zeitgeist to keep the game on top for much longer. Like many hyper-popular titles, the steam will eventually run out. Fortnite fans will eventually move onto something else if it is seen to be dropping the ball on innovation.

Unless Fortnite sees some drastic improvements over the next year, it’s very possible that Epic’s insane rate of spending and falling revenue will ring the world’s biggest death-knell for the game. With so much money being spent on digital games, it is likely that Fortnite’s competition is only going to get more and more aggressive. No amount of ‘season 2’ stunts will be enough to keep the game alive forever.