By CCN.com: Highly-anticipated first-person shooter video game Rage 2 hit the stands just a day ago, but it is already making headlines for an entirely different reason – a hilarious easter egg that takes a savage dig at Tesla CEO Elon Musk.

PC Gamer’s James Davenport was wandering the wasteland in Rage 2 when he noticed bunker doors suspiciously peeping out of the side of a mountain. The sight piqued Davenport’s interest, as he knew that there would be some mad titan or a secret lurking behind those doors. 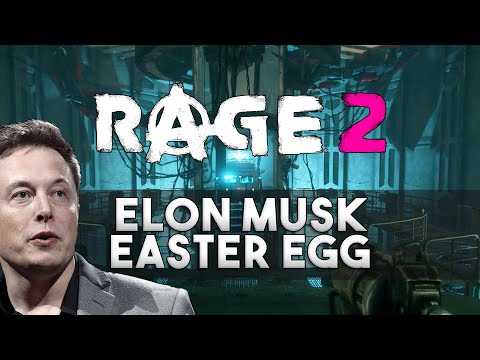 But what he found was hilarious, to say the least – an Elon Musk doppelganger named “Elton Tusk.”

Elton Tusk is a man with great imagination and a cornucopia of wealth, and he’s also the CEO of Tusk Industries. The fictional company dabbles in space travel and other dystopian technologies, which is clearly a dig at Elon Musk – in case the spoofy name did not convince you.

But wait, the similarities Rage 2 is trying to show us don’t end there. According to Davenport:

“As I move through the bunker, Tusk harries me and hails himself, threatening my small stature while boasting about power and intellect beyond comprehension.”

“I’m called a few more names before I enter a large circular room.”

This is another jab at the real-life Musk, as the South African billionaire is known for his tirades against those who incur his ire, allegedly including his own employees.

As Davenport moves into a different room in the bunker, he finds that the Rage 2 developers have put the fictional Elon Musk’s brain in a jar.

Rage 2’s Elon Musk easter egg seems to be in good humor, but it also hints at the billionaire’s flaws. Musk is known for shooting (or rather typing) from the hip and occasionally making absurd claims that even Tesla bulls believe are overly-optimistic.

For example, critics say that Musk’s tall claim of putting a million Tesla robotaxis on the road by next year is full of hot air. They allege that the Tesla CEO is simply trying to deflect attention away from the real operational challenges that his company is facing in a bid to keep the stock price up.

But that hasn’t worked, and Wall Street has called his bluff, with Tesla stock losing more than 31% of its value so far in 2019.

Meanwhile, his mission of sending everyday people into space hasn’t exactly taken off. One of his SpaceX Crew Dragon capsules exploded last month, which is concerning given that the company plans to use them to ferry astronauts into space.

So does Rage 2’s revelation that “Elton Tusk” has been unable to save the world from an apocalyptic future despite all the resources at his disposal – money, intelligence, and technology – suggest that his real-life counterpart will ultimately fail in his quest to rescue humanity?