Elizabeth Warren Schemes to Take Down Trump in the 2020 Presidential Election, Does She Even Stand a Chance?

After much speculation, Senator Elizabeth Warren officially launched her 2020 presidential campaign on Saturday, where she vowed to challenge the super wealthy and fellow Democrats who served as their power brokers. The decision to run marks a significant departure for Warren, who less than two years ago told her constituents in Massachusetts that she doesn’t want to become president.

ELIZABETH WARREN HAS ‘CHANGE OF HEART’ 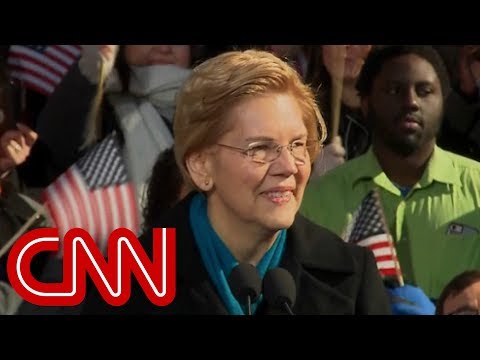 Standing before a crowd in Everett Mills, Massachusetts on Saturday, Warren declared her intent to win the Democratic Party’s presidential nomination for the 2020 election. In a 44-minute speech, she outed corporations and the super wealthy for “waging class warfare against hardworking people.”

Warren not only invoked class warfare in her speech, she made it abundantly clear that the real reason she is running is to take down Donald Trump. In her view, Trump is an “extreme symptom of what’s gone wrong in America.” He is merely “a product of a rigged system that props up the rich and powerful and kicks dirt on everyone else. So once he’s gone, we can’t pretend that none of this ever happened.”

What have Elizabeth Warren and the other 2020 U.S. presidential candidates said about bitcoin? Read this comprehensive guide to find out.

WHAT ARE HER CHANCES?

Warren represents a form of ultra-left populism that has become ascendant in the Democratic Party. However, even among the more progressive Democrats, she is often considered a fringe candidate whose platform is unlikely to resonate with American voters. As a general rule, U.S. presidential elections are won from the center out as opposed to the fringes. Trump may have been an outlier, but he was a far different outlier than what Warren represents.

That being said, Warren’s chance of becoming the Democratic nominee goes up if Bernie Sanders decides not to run in 2020. Sanders did a masterful job reeling in two groups of Democratic voters in 2016: liberals who despise Hillary Clinton and Millennials who don’t know anything about economics. If he’s back in the race, Warren will struggle to collect young liberal voters.

Back in November, Sanders said he will “probably run” for president in 2020. However, he has yet to formalize those plans.

Polling data courtesy of Real Clear Politics show Democratic voters overwhelmingly support Joe Biden as the party’s next presidential nominee. At last check, roughly a third of Democrats backed the former vice president. Sanders is a distant second at 12.3%. Warren is down in fifth place at 5.5%.

President Trump has made it abundantly clear that he is not worried about Elizabeth Warren. In fact, he has long hoped for her to join the Democratic race for the nomination.

“We’ll see how she does, I wish her well. I hope she does well. I’d love to run against her.”

As political opponents, Trump and Warren first butted heads during the 2016 presidential run. Since then, Trump has been labeling Warren “Pocahontas” for allegedly faking her Native American heritage.

Warren later released DNA results that showed extremely minor traces of Native American ancestry, perhaps less than the average American. Basically, the test results showed she was somewhere between 1/64 and 1/1024 Native American. That works out to between 0.1% to 1.5%.

Making matters worse is the fact that Warren declared herself “American Indian” on a Texas bar registration card in 1986. She has since apologized for doing so, according to The Washington Post.

Then there’s this gem:

Even CNN admits that Warren’s path to the White House has become a lot harder since the DNA fiasco blew up last October. Current polls show they are not off the mark.

Dow Under Pressure as Pre-Election Jitters Weigh on U.S. Stock Market
No Comments
← PreviousWhy This Unholy Trinity of State-Run Crypto Projects Could Poison Donald Trump’s Stance on Bitcoin
Next →Why Low Mortgage Rates Could Help Power the Next Bitcoin Bull Run