Conspiracy theories about Jeffrey Epstein’s death in the Metropolitan Correctional Center (MCC) have run rampant in recent weeks after the case was thrust back into the spotlight. Leaked audio recordings of ABC news anchor Amy Robach expressing frustration over the network’s reluctance to broadcast an interview with one of his alleged victims further underscored the growing mistrust between the conservative public and the media while adding fuel to speculation that Epstein was murdered by one of the powerful elite tied to his sex-trafficking ring. 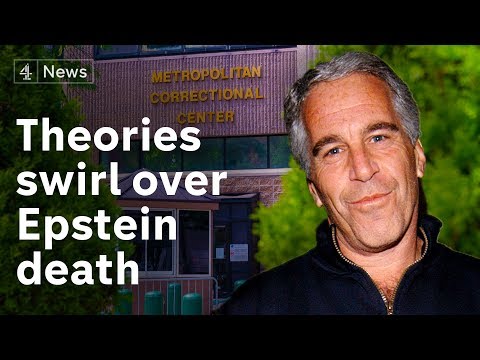 Epstein was found dead in his cell at the Metropolitan Correctional Center in downtown Manhattan on Aug. 10. His death was ultimately ruled a suicide, but several suspicious circumstances that allowed a high-risk inmate to commit suicide have caused many to question whether the jail is covering up something more nefarious.

Epstein allegedly attempted suicide just a few weeks before his death. While he had been on suicide watch following the incident, he was taken off just days before he was found dead in his cell. Two guards assigned to check on Epstein every 30 minutes failed to do so, and surveillance footage from the area around his cell is reportedly ‘unusable.’

Previous MCC inmates have given interviews claiming there’s “no way” Jeffrey Epstein could have hanged himself. One inmate told the New York Post that the paper-thin sheets couldn’t hold a grown man’s weight.

Error upon error would have had to align in order for Jeffrey Epstein to commit suicide. That many coincidences seem impossible to imagine, but they’re not— according to those with experience in the correctional industry.

Martin F Horn, a Lecturer in Corrections at the John Jay College of Criminal Justice and the former Commissioner of the New York City Department of Correction told CCN.com,

It’s certainly possible that there was a conspiracy, that someone got to someone and for whatever reason staff within the federal jail in Lower Manhattan were complicit in setting up or facilitating Epstein’s death. But it’s equally possible that it was gross ineptitude.

At the end of the day, Horn says it was negligent to allow someone like Jeffrey Epstein the time and resources to commit suicide.

It is fairly common practice in the industry that an individual who is deemed to be at risk of suicide, even if they’re not actively suicidal, should be placed in a cell where […] there aren’t hooks, where there isn’t a bunk bed.

He also said there are many simple, common practices that prisons use to ensure high-risk inmates don’t hurt themselves— like regular supervision and reliable surveillance.

When asked about the “unusable surveillance footage” Horn said there are a lot of cases in which something happens to an inmate and the recording somehow goes missing. Horn said in a well run prison, the recording would be kept in a secure location that only the warden can access and the cameras checked for operability daily.

These procedures sound simple, but unfortunately under-staffing and ineptitude mean they are often disregarded.

Horn says foul play is a possibility in Epstein’s death, but chain of errors that would have had to happen at MCC is also believable.

I’m disappointed when I see it, but I’m not shocked. I’ve seen stuff in my career— malfeasance and nonfeasance and ineptitude. At the end of the day, prisons and jails are only as secure as the people who work there.

This isn’t the first time MCC has been accused of gross negligence. Andrew Laufer is representing the family of Roberto Grant, an MCC inmate who was beaten to death in one of the prison’s dormitories in 2015. A correctional officer initially told Grant’s family that he died of a drug overdose, but the autopsy revealed that he had been beaten to death and no drugs were present in his system.

Interviewed this morning on @CNN regarding the conditions at MCC. pic.twitter.com/qkJGaI8Ajt

Laufer told CCN.com, “The fed claims that there’s no video surveillance of [the dormitory], which I find hard to believe […] regardless, they would have officers patrolling the area.”

To say that they neglected to appropriately and reasonably act in a way that would have discovered this type of an assault on my client when it was going on is just egregious. He was a healthy 35 year old guy […] He was probably fighting for his life, screaming his head off […] and no one came to his aid.

Laufer is still in the early stages of discovery, but he says that it’s difficult to get accurate information regarding incidents between guards and inmates.

That lack of information is a huge part of the reason conspiracy theories about Jeffrey Epstein’s death have gotten so much traction. But Laufer says those theories are unlikely.

“I think that it was gross negligence,” Laufer said. “I don’t know any mental health professional that would have cleared him within a week of committing suicide. That’s irresponsible. That’s gross negligence in my opinion.”

Bruce Barket, who represents Epstein’s ex-cellmate Nicholas Tartaglion, believes the notion that Epstein was murdered is ridiculous. He told CCN.com,

In the aftermath of Epstein’s death, Tartaglion was allegedly threatened by MCC guards to “shut up” and “stop talking.” A letter Barket penned to federal Judge Kenneth Karas said, “The clear message Mr. Tartaglione has received is that if he conveys information about the facility or about [Epstein’s] recent suicide, there will be a price to pay.”

Barket has argued that the conditions at MCC are “deplorable” and said he hopes Epstein’s case will shine a light on the cruelty and laziness with which it is run.