The Dow Jones dipped on Wednesday, unable to garner any meaningful momentum even as Boeing shrugged off some wobbly earnings and Apple basked in more positive forecasts.

A lack of China trade war developments appears to have removed the volatility from the marketplace, but the Dow began slipping late in the session as growing fears of a potential bipartisan rebellion against Donald Trump raised impeachment odds.

Those fears reached a crescendo after the president called Republicans who refused to support him “human scum”.

It was a day of extraordinary calm in financial markets, and all the major US stock market indices moved within just a few points of their opening prices.

Surprisingly, it was a pretty buoyant day for the oil price despite the reduction of tensions in Syria, as crude launched more than 2.5% higher, while the gold price was also 0.58% higher.

Trump’s declaration of a “permanent” ceasefire between Turkey and The Kurds was accompanied by a tweet from a prominent Kurdish leader confirming the report. But if the Dow didn’t react much to the US exit from Syria, it certainly didn’t move at the announcement of this ceasefire.

Although there has been no fresh news on the trade war front, risks appear to be growing for the Dow as China is seeking retaliatory tariffs from the WTO. This doesn’t look like the behavior of a nation ready to sign a comprehensive trade deal.

Meanwhile, impeachment risks continue to swell. On Wednesday, President Trump railed against his Republican critics, whom he savaged as “human scum” in an early-afternoon tweet.

The Never Trumper Republicans, though on respirators with not many left, are in certain ways worse and more dangerous for our Country than the Do Nothing Democrats. Watch out for them, they are human scum!

That’s a strange move, considering that he might need the support of Trump-skeptical Republicans in the Senate to avoid removal from office. Tribalism is powerful in US politics, and stock markets appear to be taking this development seriously.

For Dow bulls hoping that a resolution on Brexit would provide an additional springboard for the US stock market, things might not be so clear cut.

ING Chief International Economist James Knightley believes that while some positive developments are shining through in Europe, there is no guarantee that this will reverse the trend for slowing growth in the United States.

“Equity markets have taken comfort from [Brexit] developments. Nonetheless, external data remains weak, with Chinese and European growth continuing to disappoint, but at least there is some talk about Germany softening its line on balanced budgets. There is a possibility that we could see some fiscal stimulus, although we acknowledge that it will take time to translate into real projects that contribute positively to economic growth. So while there are potential positives coming through from the external side, they are unlikely to translate into a stronger US growth story anytime soon.”

Ultimately, this rather pessimistic outlook for equity markets is tempered slightly by ING’s view that the Fed will make three rate cuts between now and February.

“Economists are mixed, but with the market currently pricing in 23bp of a 25bp rate cut for next Wednesday we believe the Fed will take action. Assuming the economy continues to soften in line with our view – we expect sub 2% 3Q19 GDP growth and sub 1.5% growth in 4Q – then the Fed will likely follow up with additional rate cuts in December and January.”

The Dow 30 was fortunate on Wednesday, as Boeing bulls shrugged off a mixed earnings report that may have been saved by an exceptionally optimistic timetable for the return of the 737 Max to the skies. BA stock rose 0.11% in a display of cautious optimism from the market. 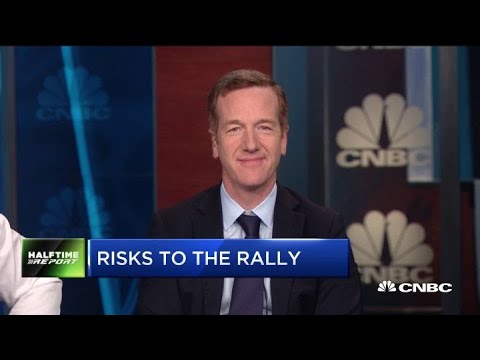 Apple (+1.04%) keeps on rising, as the world’s most valuable company pushed on to fresh record highs. This time it appeared to be another extremely bold analyst call that lifted AAPL stock; an analyst from Morgan Stanley anticipated wild success for the new Apple TV+ service.

Nike stock slid 3.09%, lagging the Dow Jones as the apparel giant’s recent leadership change was put under the microscope. Former CEO Mark Peter will stay on as executive chairman, but this appeared to give no comfort to investors who have been loving the manner with which Peter has navigated a potentially disastrous trade war so skillfully.