The Dow Jones clung to small gains on Monday thanks to better-than-expected US manufacturing data, despite a barrage of negative geopolitical headlines for the US stock market.

Muddying the market’s outlook, German manufacturing data missed by a wide margin, Hong Kong remains in chaos, and tensions between the US and Iran continue to trend in the wrong direction.

The Dow Jones Industrial Average reversed earlier losses to mount a slight advance in late afternoon trading. At last check, the Dow had gained 50.58 points or 0.19% to rise to 26,985.65.

In commodity markets, silver went berserk – rising 4.8% – while gold was up a more moderate 1.03%. Oil markets rose despite a much firmer US dollar, confirming it was a risk-off day in the global stock market after Europe’s STOXX 50 fell 0.96%.

Trade between the US and China is the lifeblood of the global economy, so it is not surprising that a major exporter like Germany is feeling the heat in its manufacturing sector. However, adding to the Dow’s bull case, US PMI came in better than expected. This was bolstered by forecast-beating manufacturing PMI, though services were slightly weaker than anticipated.

It is important to note that in the US, services are a much more significant portion of GDP, so on balance, the September PMI reading could be construed as a slight negative for the stock market.

Despite some positive rumblings out of the US-China trade war, tensions in the Middle East are proving to be of significant concern to global stocks.

The US moving troops to Saudi Arabia and Dubai demonstrates an escalation, and Iran’s Foreign Minister Javad Zarif refused to rule out the possibility of war. For now, the Dow bulls appear optimistic that the standoff will remain cold, and equities have proven resilient. 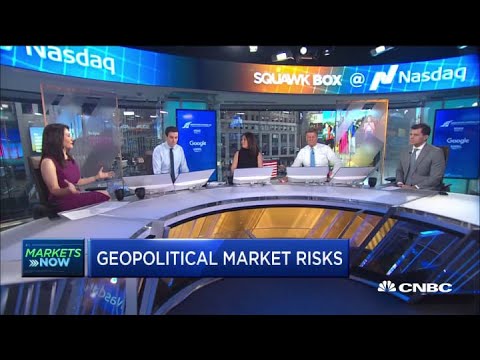 Meanwhile, Hong Kong refuses to go away as a significant source of global angst. It appears that tensions are once again on the rise. Given that this standoff is viewed as a substantial obstacle to a trade deal between Trump and China, markets take a dim view of the fact there appears to be no end in sight.

The sharp spike in oil prices after last week’s attack on Saudi Arabia is likely nothing compared to the rally if the US and Iran engaged in open warfare.

In Charles Schwab’s stock market outlook, their financial research center had the following to say about the negative prospects for the economy if the oil price was to rise further:

“An attack on Saudi Arabian oil facilities in mid-September has raised the possibility of a sharp and sustained rise in oil prices. If that should happen, it would be a shock at a bad time for a vulnerable global economy. Historically, recessions often have followed oil-price spikes.”

While the Dow 30 was only able to move slightly higher, it was a very positive day for consumer staples. Walmart shone, up over 0.75%, while fast-food chain McDonald’s was able to climb nearly 1%. These moves into domestic havens likely come from fears over global growth amid Trump’s trade war, alongside evidence that the US consumer remains strong.

Apple stock was 0.81% higher amid news that the company would dodge tariffs by assembling its Mac Pro in Austin, Texas.

Walgreens was one of the biggest DJIA laggards on the day, as its stock collapsed 1.25%. UnitedHealth was also down 1.7% after progressive-leaning Democrat Elizabeth Warren topped Joe Biden for the first time in an Iowa poll.