Both Dow futures and the bitcoin price are making strides ahead of the US trading session, with bulls in the stock market and nascent cryptocurrency sector finding much to be optimistic about.

The US stock market had been a mixed bag for investors on Tuesday. Following a wobbly start, the Dow closed the day in the green with a 51.74 point or 0.21 percent gain. Both the S&P 500 and Nasdaq, on the other hand, slipped into the red. The S&P 500 posted a minor 0.15 percent decline, but the tech-heavy Nasdaq plunged 0.81 percent.

Wednesday’s major pre-market rally came the day after Silicon Valley giant Apple delivered its quarterly earnings report. Analysts weren’t exactly impressed with the firm’s results — Apple barely hit revenue estimates and iPhone revenue plunged — but most of this had already been baked in when CEO Tim Cook slashed guidance targets earlier in the month. For shareholders, it seems, no news is good news, and AAPL stock popped in after-market trading. 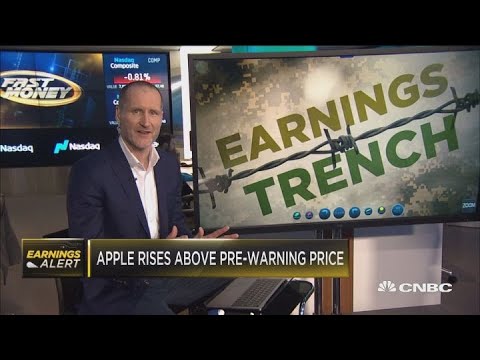 The stock market rally continued ahead of Wednesday’s open, thanks to a blockbuster earnings report from Boeing, whose shares are up nearly 6 percent in pre-market trading.

Earning season has thus far not been the wrench-in-the-recovery that bears had warned it would be. According to FactSet, almost three-fourths of S&P 500 companies who have published their quarterly earnings have beat estimates.

Trump to Congress: Don’t Waste Your Time Negotiating if a Wall’s Not on the Table

Though not likely to influence the direction of the stock market today, a variety of storm clouds remain on the horizon.

One of these is the potential for a second US government shutdown, which would kick in when the three-week continuing resolution runs out on Feb. 15. President Donald Trump continues to demand the border wall funding he failed to achieve during the previous shutdown, which lasted a record 35 days.

Tweeting on Wednesday, he warned Congress that their spending package negotiations and border security proposals are a waste of time if they do not include wall funding, or at the very least what he calls a “physical barrier.”

“If the committee of Republicans and Democrats now meeting on Border Security is not discussing or contemplating a Wall or Physical Barrier,” Trump said, “they are Wasting their time!”

The first government shutdown already cost the US around $11 billion, according to a Congressional Budget Office estimate — almost double the $5.7 billion Trump wanted to spend on the wall.

Rating agency Moody’s warns that a second shutdown would hit the US economy even harder.

“If another shutdown occurs, there could be a more severe impact on the US economy than during the recently ended shutdown,” Moody’s said in a statement, per a Reuters report, forecasting that it would stunt GDP growth and batter corporate earnings.

On the cryptocurrency front, asset outlooks remain bearish, though bitcoin and most other large-cap tokens entered the day on a moderate incline.

That minor turnaround followed reports on Tuesday that major asset manager Fidelity is just weeks away from launching its long-awaited bitcoin custody service, which will allow institutional investors to store their cryptocurrency assets with a trusted name from the mainstream financial sector. Bulls such as Galaxy Digital founder and former Fortress principal Mike Novogratz have long said that developments such as these will help power the next bitcoin bull run, and now they’re finally beginning to arrive.

That said, many technical analysts remain bearish on the short-term direction of the bitcoin price. Most chart-watchers expect the flagship cryptocurrency to at least test its $3,000 support level, and how that support responds to the gravity of bitcoin’s 13-month bear market could determine whether the floor is in or if the bears have more room to run.

There was a bit more action in the altcoin markets, as bitcoin’s smaller competitors took advantage of the day’s positive sentiment to recoup a bit of market share from the dominant cryptocurrency.

Despite some past disagreements — and lawsuits — R3 and crypto startup Ripple are closely aligned. Indeed, Ripple CEO Brad Garlinghouse was on stage during the panel discussion where the R3-SWIFT partnership was announced, and SWIFT CEO Gottfried Leibbrandt had some kind words for XRP.

“I think that the big part of Ripple’s value proposition is the cryptocurrency XRP,” he said.

That was more than enough to shake the ripple bulls out of their slumber, and as of the time of writing XRP had leaped by nearly 7 percent to just under $0.31.

The majority of other large cryptocurrencies rose by 2 percent to 3 percent on the day, carrying the overall crypto market cap to a present value of almost $115 billion.

Josiah Wilmoth
Josiah is the former U.S. Editor at CCN.com, where he focused on financial markets. His work has also been featured on Yahoo Finance and Investing.com. He lives in rural Virginia. Connect with him on LinkedIn or Muck Rack. Email him directly at josiah.wilmoth(at)ccn.com. Josiah Wilmoth is a Trusted Journalist.
Subscribe
0 Comments
Inline Feedbacks
View all comments
← PreviousTesla’s Model S and X Now Sport the Same 100kWh Battery Pack; Will it Simplify Production?
Next →Dow Surges 316 Points, Why Apple’s Earnings are Leading the Charge