Throughout March, despite concerns regarding the decline in household net worth, increasing federal debt, and the downside earnings revisions of major U.S. conglomerates, analysts have forecasted an optimistic short-term movement for the Dow Jones due to trade deal optimism.

According to the WSJ, Terry Branstad, the U.S. envoy to Beijing, has confirmed that the trade deal has not been finalized yet.

The uncertainty in the trade talks between the two countries could immediately intensify geopolitical risks, causing the Dow to retrace.

Trade Deal Uncertainty Will Put Pressure on the Dow

Fundamental factors in the U.S. market including jobs and productivity growth remained strong over the past three months.

But, as reported by CCN.com on March 7, five core issues have prevented the S&P 500 and the Dow Jones to recover beyond key resistance levels:

The reports on the prospect of a trade deal being signed by the month’s end by President Donald Trump and President Xi Jinping strengthened the U.S. market and consequently, the rest of the global market.

Amidst trade agreement positivity and the government of China’s decision to allow its domestic market to become more accessible to domestic investors, the SSE Composite, which tracks all stocks on the Shanghai Stock Exchange, surged by 25 percent since January.

On the day, however, as the envoy confirmed that the trade talks have not been finalized just yet, the SSE Composite plunged by 4.4 percent, demonstrating weakness throughout the past week.

“A date hasn’t been finalized. Both sides agree that there has to be significant progress, meaning a feeling that they’re very close before that happens. We’re not there yet. But we’re closer than we’ve been for a very long time,” Branstad said.

The Dow, which has also struggled to sustain momentum in the past week, already saw a decline of over 700 points in a short time frame and the new development in the trade talks could lead the market to drop yet again.

Several analysts have said that the “significant” progress of the trade deal is largely priced into the market and that means the majority of investors expect an agreement to be reached in the near-term.

If the negotiators begin to show difficulties during the discussions, the Dow Jones and the S&P 500 could continue to drop, potentially off of failed tests of crucial resistance levels, intensifying downturns. 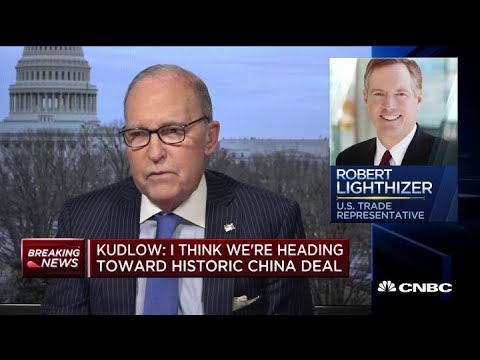 There is hope that perhaps by the end of this month or early April the two leaders will get together and finalize an agreement. Don’t hold me to that because it’s not written in cement yet.

Based on the recent statement released by the U.S. envoy, it is becoming increasingly unlikely that an agreement will be enforced by the month’s end.

The SSE Composite has dropped by 4.4 percent within hours following the statement of the U.S. envoy and reports on the decline of Chinese exports by 20.7 percent since 2018.

#China export data for Feb was pretty ugly at -20.7%y/y. The surprise Jan rise turns out to be nothing more than front-loading ahead of Lunar New Year and probably take advantage of the tariff truce. New export orders show hopeful signs. But we need the trade deal concluded fast. pic.twitter.com/FKjrMMyxsR

The Dow is arguably in a better position than the SSE Composite due to the strong fundamental factors in the U.S. market but it will be challenging for the Dow to remain stable following an unexpected development in the trade talks.