While the initial reaction to yesterday’s rate cut was bearish for the Dow, today’s weak domestic data appears to have convinced investors that the Powell-run Fed will err on the side of caution and execute further rate cuts this year.

According to the Institute for Supply Management (ISM), national factory activity slid to 51.2 in July – its worst mark since before President Trump took office.

Given Trump’s laser-focus on US manufacturing, it should be alarming to the administration to see such a weak US production figure. Cheap cash-loving Dow bulls, more concerned with the outlook for interest rates than macroeconomics, are nonetheless enthusiastic about the prospect of more meaningful easing from the Fed.

Kjetil Olsen at Nordea reaffirmed this view in a piece of research for the bank, where he stated his belief that the Fed’s dovishness is now here to stay:

“The drop was almost in full explained by a drop in both the production index and the employment index… Export orders continued down, however, and is now just below 50.  Global weakness and uncertainty around trade was an important reason for the Feds rate cut yesterday. In sum, therefore, today’s numbers will not persuade the FOMC to think differently about monetary policy going forward.” 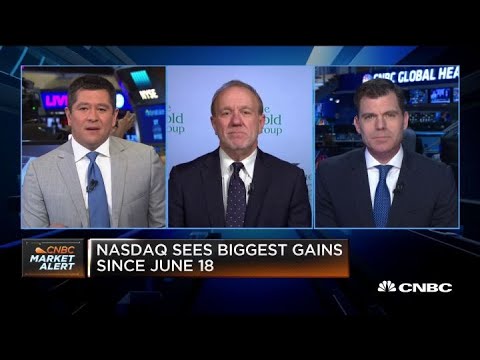 Helping drive the Dow Jones higher were the tech crossover stocks – Microsoft, for instance, was up over 3%. IBM and Apple were not far behind with more than 2% gains.

Cisco Systems and Walgreens were also able to crack the 2% mark, while Goldman Sachs and Exxon Mobil were laggards, slightly in the red. A scandal-ridden Boeing, once the darling of the Dow, was only able to claw its way 0.4% higher despite benign risk sentiment.

As ever, the resilience of the Dow is remarkable. Bullish appetite is readily apparent, and any recent dips have been snapped up aggressively. Inflation is still low in the US, and with a Federal Reserve that’s likely prepared to ease further, Goldilocks conditions appear to be ongoing for the US stock market.

Until Europe becomes a viable growth investment, US indexes like the Dow appear to be the only game in town. Even if certain economic indicators are worsening, the dip-buying mentality of the last decade appears well intact.