Even a slew of anti-Fed comments from Donald Trump failed to spoil the party as the Dow shrugged off the antagonistic Twitter tirade.

While there was no particular catalyst for the broad rally in risk assets, the Dow was due an upward correction after a torrid week. A rare market rally in Europe helped galvanize US indices; the CAC 40 and FTSE 100 both closed in the green.

From a fundamental viewpoint, there is a growing belief that Trump is going to blink in the trade war standoff and offer some concessions to China heading into the 2020 election cycle. This is good news for equities but is still very much a theory which could be proven wrong by the mercurial US president.

Looking at the technical chart, the 200-DMA (daily moving average) looks to be providing support for the Dow Jones, as bulls anxiously defend this level.

Despite all the optimism on Wall Street, analysts at Nordea Markets believe that the danger for equities won’t dissipate while the Chinese Yuan continues to trade on the wrong side of the 7-per-dollar mark. The Scandinavian bank is forecasting more weakness in the CNY, and therefore more market angst moving forward:

“The break of 7.00 on the topside in USD/CNY could be viewed as a negative game-changer for risky assets, as it marks another negative shock to the global trade outlook. So as long as USD/CNY will continue to trade between 7.00-7.30, we see it as a negative for risk appetite, while a break above 7.30 would mark the next major escalation… We have updated our view and expect USD/CNY to be headed higher towards 7.30 alongside increased trade tensions.” 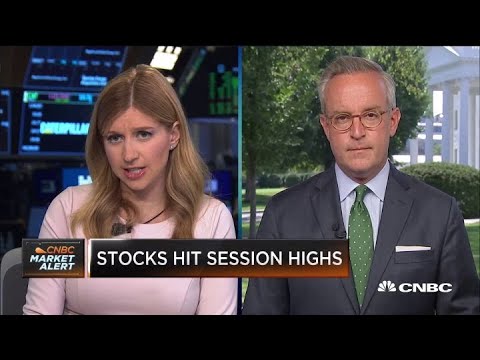 It looks to be a day of some relief for Dow stocks, as embattled Apple shares rose 1.4%, while Dow Inc. led the way with almost 3% of gains. The move in DOW was bolstered by a broad rally in chemical stocks, as this sector also performed very strongly in the European trading session.

Oil prices were a clear benefit to the DJIA as Chevron and Exxon Mobil both posted solid gains. Intel was one of the rare laggards in the Dow, hurt badly by the positive news for AMD (+18%) after the rival chipmaker announced high profile deals with Google and Twitter.

As your President, one would think that I would be thrilled with our very strong dollar. I am not! The Fed’s high interest rate level, in comparison to other countries, is keeping the dollar high, making it more difficult for our great manufacturers like Caterpillar, Boeing,…..

The rally didn’t stop President Trump from railing against the Federal Reserve for loading the market down with a “very strong dollar.” But the market mostly brushed off his attacks.

Notably, Trump explicitly mentioned two prominent Dow Jones members (Boeing and Caterpillar) in his tweets today. Both stocks are up over 0.5%, and traders seem to be disregarding his warnings. This may be due to the prevailing opinion that, alongside Boeing’s 737 Max scandal, the trade war – not the strong dollar – is the primary obstacle for these two companies.