U.S. stock futures failed to sustain their rally in after-hours trading Wednesday, as investors eyed an uneven recovery in the shadow of the Covid-19 health crisis.

Futures on all three major U.S. indexes gave back gains Wednesday night, reflecting a depressed environment for risk assets. Dow Jones mini futures rose by as much as 125 points before paring gains later in the session. The industrials benchmark is currently trading flat.

S&P 500 futures are also trading flat after rising by as much as 0.4%. Nasdaq 100 mini contracts followed a similar trajectory and were last up 0.1%.

The Dow has dropped roughly 1,000 points over the past two days on a combination of pandemic hysteria and bearish testimony from Washington’s top central banker.

The Federal Reserve has made it abundantly clear it will use whatever means necessary to prop up a dying economy. Some argue that the central has “gone well past the point of ‘QE infinity'” by slashing interest rates down to zero and increasing the size of its balance sheet by roughly $1.5 trillion this year alone.

Neel Kashkari, president of the Minneapolis Fed, told Bloomberg in March that the central bank has an “infinite amount of cash” it can deploy when needed.

Although ‘QE infinity’ is well underway, Chairman Jerome Powell has talked up the case for endless money printing. In a Wednesday morning speech, the Fed boss described the economic outlook as “highly uncertain and subject to significant downside risks.”

He added (as per The Wall Street Journal):

There is a growing sense that the recovery may come more slowly than we would like…and that may mean that it’s necessary for us to do more. 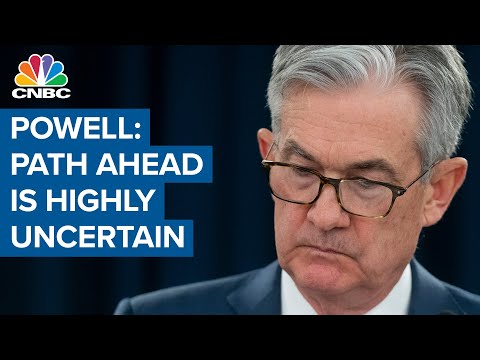 Although Powell has denied the prospect of negative interest rates, futures markets suggest they’re coming next year. The tool has been used in Europe and elsewhere with limited success to fight off so-called deflation.

For now, stock markets are reacting negatively to the prospect of an ailing economy. The ‘V-shaped’ recovery many are hoping for appears highly unlikely as lockdown measures and social-distancing norms destroy small businesses. A more likely path is a ‘W-shaped’ recovery that entails a double-dip recession before the U.S. is out of the woods. That could take years to play out.