The Dow Jones traded flat on Wednesday as uncertainty over stimulus continues. Adding to the cautious mood, President Donald Trump’s efforts to scare investors about a stock market crash if Joe Biden is elected contributed to a choppy day of trade in the U.S. stock market.

All three of the major U.S. stock market indices traded near flat mid-week, as the Dow Jones dipped slightly into the red, and the Nasdaq and S&P 500 managed to squeak out a small 0.2% gain.

Once again there was no high tier economic data in the United States today, with only a slight miss in crude oil inventories for investors to pay attention to.

Instead, as has been the case for much of the week, the progress of stimulus talks has been dominating the newswire. A relentless stream of headlines has been heavy on optimism and extremely light on anything concrete. While Nancy Pelosi and the White House both apparently want a substantial stimulus package, resistance from Senate Republicans could limit progress even if an agreement can be made.

The Dow did rally sharply after White House Chief of Staff Mark Meadows claimed that they were hoping for some kind of deal in 48 hours, but the subsequent volatility indicated how uncertain this outcome still is. Allyssa Farah, White House communications director provided perhaps the most detailed take on the current state of talks, stating in recent comments,

“The president’s position is, we’re willing to go up on the number for PPP loans and the direct payments. Some of the issues still surround state and local [funding] and some of the other issues, but we’re at the table. Conversations are happening. I think it’s kind of the best place we’ve been in.”

Despite the efforts from politicians, Goldman Sachs released a note urging investors “not to hold their breath” in the wait for stimulus. That didn’t stop Larry Kudlow from making his rounds as the market pumper in chief.

Watch his latest interview in the video below. 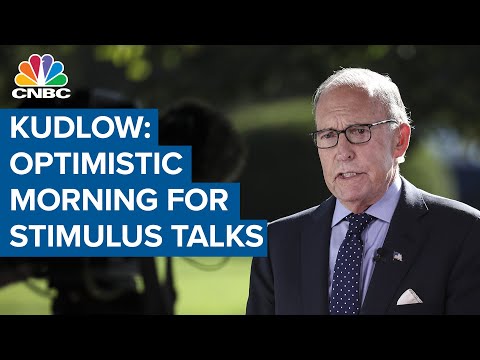 Wall Street can’t ignore the election, which is now just a few weeks away. There have been good and bad signs for both camps, though Biden drawing level in Iowa is going to be particularly concerning for the Trump campaign.

In a likely effort to spook the Dow as well as undecided voters, Trump focused his morning tweetstorm on Biden’s tax plan.

Though investors appear extremely sanguine about the prospect of hikes under a Democrat administration, this is definitely not the first time Trump has warned bulls of a stock market crash if Biden is elected President.

Watch the video for CNBC’s take on which candidate is actually better for the U.S. stock market. 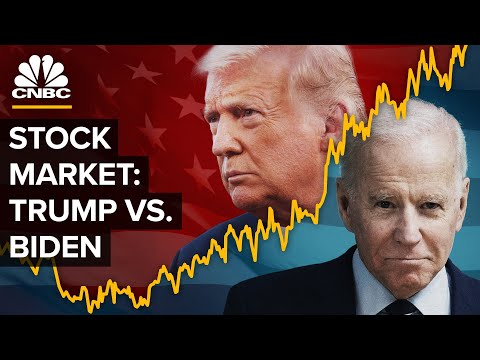 On an extremely mixed day in the Dow 30, Travelers stock surged for a second straight day, up over 5%. Basking in Tuesday’s stellar earnings report, TRV stock is enjoying a tremendous bump in income in Q3.

On the other end of the Dow Jones, Goldman Sachs was a laggard dropping -2.2%. Elsewhere in the index, there wasn’t much volatility, as Apple stock fell 0.4% and the most heavily weighted UnitedHealth traded virtually flat on the day.

Samburaj Das edited this article for CCN.com - Capital & Celeb News. If you see a breach of our Code of Ethics or find a factual, spelling, or grammar error, please contact us.