By CCN.com: The Dow succumbed to volatility during June’s first trading session after US aviation regulators unleashed a bombshell revelation that roiled the DJIA’s most critical stock: Boeing.

The Dow Jones remained under intense pressure on Monday after US aviation regulators heaped more coals on the Boeing fire, revealing that more than 300 Boeing 737 jets might be outfitted with faulty wing parts that “could lead to aircraft damage in flight.”

In a statement released on Sunday, the Federal Aviation Administration (FAA) explained that a Boeing supplier improperly manufactured as many as 148 leading-edge track slats, which play a critical role during takeoff and landing.

“The affected parts may be susceptible to premature failure or cracks resulting from the improper manufacturing process. Although a complete failure of a leading edge slat track would not result in the loss of the aircraft, a risk remains that a failed part could lead to aircraft damage in fight.” 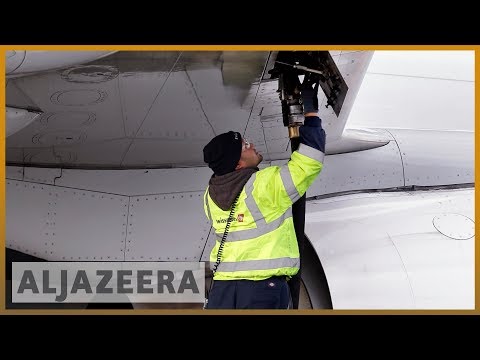 According to the FAA, those faulty parts could potentially be installed on 179 737 MAX and 133 737 NG planes. Airlines have 10 days to ground the planes and investigate whether they have improperly-manufactured leading-edge track slats installed.

Boeing 737 MAX aircraft had yet to receive an airworthiness certification from the FAA following their groundings in the wake of the second of two fatal crashes that killed 346 people.

While unrelated to the faulty system that investigators believe triggered those accidents, the shocking revelation that 737 MAX planes have yet another safety issue is unlikely to inspire consumer confidence in the controversial aircraft model. Unfortunately for Boeing, the 737 MAX is its best-selling jet.

“Boeing is a stock that tried to break out. It’s now making a series of lower lows and lower highs. It doesn’t look like it’s come in for a landing back to support,” he told CNBC, warning that BA shares could soon suffer a crippling “death cross.”

Beijing maintained its hardline stance on the trade war, viciously attacking the United States and the Trump administration for causing the conflict.

“It is foreseeable that the latest U.S. tariff hikes on China, far from resolving issues, will only make things worse for all sides,” read a white paper published by the Chinese government.

President Trump had signaled that he and Chinese President Xi Jinping could iron out their differences at the G-20 summit later this month, but strategists increasingly say that looks like a pipe dream.

Analysts warn that, without a trade deal to buoy the market, the US economy could slip into a brutal recession. According to JPMorgan Chase, there is a 40% chance the economy could succumb to a recession during the final six months of 2019, up from 25% last month.

Monday’s volatile session suggests that the Dow is not ready to mount a recovery after posting its first May loss since the European financial crisis in 2012.