From the time he thought it was merely ‘the flu’ to the time he warned it would kill more people than previous World Wars, Donald Trump has been using coronavirus as a political weapon.

Over the past few weeks the virus has gone from being a hoax driven by Democrats, to a Chinese bioweapon covered up by the liberal media. Now, it has come full circle as Trump followers revisit claims that the severity of the virus is overdone.

On Wednesday, President Trump announced that he would unveil a plan to reopen America’s economy ahead of the May 1 schedule. After briefly flirting with the idea of trying to force resistant state governments to reopen, Trump agreed he would leave the decision up to local lawmakers.

Trump Provoked Civil Unrest that Will Ruin his Plans

On the surface, that plan makes sense. If the U.S. has already reached its peak number of cases, it’s reasonable to believe that a handful of states that weren’t hit hard could reopen. After all, they can always call for another lockdown if conditions worsen, right?

Wrong. This week demonstrators in Michigan proved the deep political divisions that run through America will keep the nation from a coordinated, rational reopening. Sure, you can leave it up to local governments to close or reopen their own states, but what if that lawmaker is a Democrat?

Throughout the pandemic, Trump has encouraged his supporters not to trust their elected officials if they live in a blue state. Now, he’s standing in front of the nation telling them the coronavirus crisis is nearly over.

Earlier this week he insinuated that Democrat governors holding on to lockdown measures are simply taking a stand against him. He seemed to goad his followers on saying things like, “I’d like to see that person run for re-election. They’re going to open.” 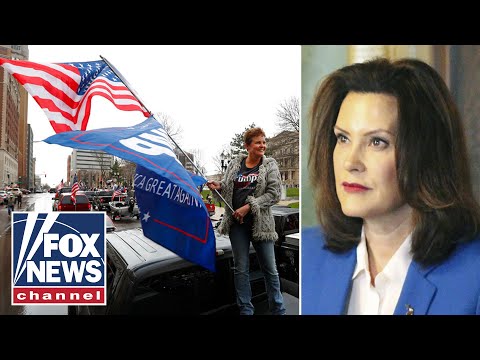 Just look at Michigan. A group of around 4,000 protestors in Lansing gathered to protest Democrat Governor Gretchen Whitmer’s stay-at-home orders. According to the protest organizers, demonstrators were urged to stay in their cars and abide by social distancing restrictions.

Marian Sheridan, co-founder of the Michigan Conservative Coalition, said the rally was to voice how unnecessary the lockdown was:

Citizens are frankly tired of being treated like babies. As adults, we now know what needs to be done to stay safe.

Yet hundreds of protestors could be seen without masks congregated in the streets. Some admitted they don’t believe the “so-called scientists” that recommend social distancing.

Uninformed, Angry People Are a Recipe for Chaos

That’s likely just the beginning of social unrest as states reopen at their governor’s discretion. The group in Michigan isn’t alone in mistrusting the scientific evidence related to coronavirus. A Pew Research study shows that roughly 30% of Americans believe Covid-19 was created in a lab despite mounting evidence to the contrary. One percent don’t believe the virus exists at all.

What’s more, the survey found that those who are most vulnerable are the same people who are misinformed about coronavirus. Those who said they believe conspiracy theories about coronavirus tended to have a high school diploma or less. A large percentage also identified as black or Latino.

Those who believe misinformation about the virus are also the people most likely to be harmed by the pandemic.

These minority and low-income populations are more likely to die from coronavirus because of inequalities in the American healthcare system.

So, there’s a huge percentage of Americans who are skeptical about coronavirus–its origin, how to avoid it—even whether or not it’s dangerous. As some states re-open and others remain closed, it’s going to add an additional layer of uncertainty among those who already mistrust their elected officials.

Donald Trump’s brazen attacks on the media and state lawmakers have emboldened many of those skeptics to resist what they’re being told. That will be a challenge for lawmakers if the vulnerable populations they’re striving to protect are pushing back.