According to Donald Trump, hydroxychloroquine is nothing short of a miracle drug.

Today, the 45th president has announced that he’s taking the drug to stave off coronavirus infection. Trump, who said that he’s been taking it every day for about 10 days, touts it as a miracle cure of sorts. 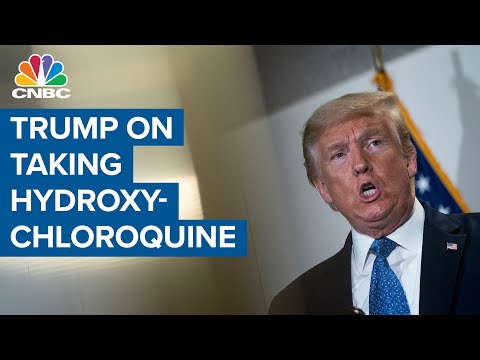 Naturally, medical professionals have warned against taking hydroxychloroquine for any other reason than its designated purpose. (It’s an anti-malarial drug.)

Trump himself has even admitted that he doesn’t know if the drug is effective against COVID-19. Medical professionals say it can cause irreversible damage, and even kill, when not taken as directed.

Trump doesn’t necessarily care about all of that. Because, at the end of the day, his pockets are being lined.

Even One Dollar Earned From Hydroxychloroquine Sales Is One Too Many

Let’s be clear: Trump’s financial interest in Sanofi is a small one. The Trump family, along with Commerce Secretary Wilbur Ross, run funds that hold investments in the company that manufactures hydroxychloroquine.

But if the President earns even one dollar from hydroxychloroquine sales, it’s one dollar too many.

Article I, Section 9, Clause 8 of the United States Constitution is known as the Title of Nobility Clause. Most Americans, however, know it as the “Emoluments Clause.”

And, as of this writing, three lawsuits are currently pending against Trump for his Emoluments violations.

While Trump swears that all the profits from his various businesses are being “put into trust,” one can’t say, in good faith, that Trump has been above-board with all his business dealings.

Why would his hydroxychloroquine profits be any different?

There’s even some suggestion that Trump is taking “dark money” — that is, the money of an unknown source donated to influence a politician in one way or another — to push hydroxychloroquine.

According to one report, the Job Creators Network (founded by Home Depot co-founder Bernard Marcus, who is a well-known Trump supporter and one of his biggest donors) is behind this push.

Reportedly, the Job Creators Network teamed up with Physicians for Reform to launch a mass campaign that included an online petition, a series of Facebook ads, and a mass text messaging campaign. Their goal? To push hydroxychloroquine as an effective COVID-19 treatment and cure.

They’ve been so effective in their campaigning, in fact, that there’s allegedly a hydroxychloroquine shortage. And this is proving to be a problem for those who suffer from malaria, arthritis, and lupus. Hydroxychloroquine is proven to be effective in treating these maladies — and thanks to the shortage, patients are struggling to fill their prescriptions.

And, all the while, “Big Pharma” — and its investors, including Trump — continue to get rich.

Don’t think, for one minute, that Trump is pushing hydroxychloroquine as an unproven “cure” because he cares about “middle America.” He’s pushing it because it lines his pockets.