David Stockman, US budget director during the Ronald Reagan administration, continues to rake current US President Donald Trump over the coals during a whirlwind press tour designed to promote his new anti-Trump book. In his latest diatribe, Stockman calls the president an “unhinged madman” who is waging not one, not two or three, but four different wars on the US economy.

Speaking to Yahoo’s The Ticker, Stockman lambasts Trump as “delusional,” saying that when you have an “unhinged madman in the Oval Office…anything is possible.”

Just days ago, Stockman, who himself once frequented the White House, warned that investors should flee the stock market as an inevitable collapse and recession is imminent. A combination of economic headwinds and an “unhinged fellow” at the helm means that this time a recession can’t be held at bay by monetary forces. 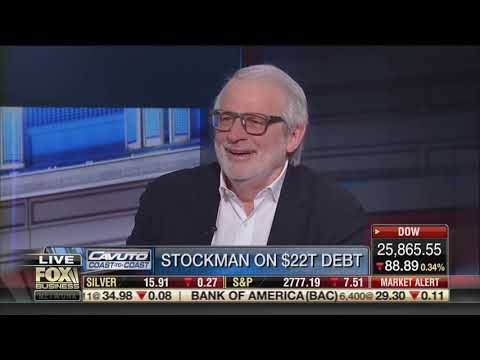 In his latest appearance, Stockman says Trump is conducting a trade war, a border war, a political war on the US Federal Reserve, and, as debt grows, a war on the very solvency of the United States.

“He’s conducting four wars on the American economy, and it’s not going to make it great again.”

Trump’s Four-Front War on the US Economy

Stockman takes Trump to task for the US-China trade war, arguing that it’s really a war on US consumers.

“The trade war is a war on consumers.”

He adds that if tariffs move from 10% – already costing consumers $30 billion per year on imports from China – it is going to “be that much worse.”

….I am a Tariff Man. When people or countries come in to raid the great wealth of our Nation, I want them to pay for the privilege of doing so. It will always be the best way to max out our economic power. We are right now taking in $billions in Tariffs. MAKE AMERICA RICH AGAIN

The border war, in the former US representative’s expert eyes, is a “war on immigrant labor.” As the nation’s labor force contracts, Stockman says immigrant labor is needed:

“We shouldn’t be having a, you know, silly battle over a wall in a border where there isn’t a crisis.”

The US Federal Reserve constitutes a point of “political war” for Trump. A Fed which Stockman says was finally “getting enough courage up to normalize interest rates” chickened out due to Trump’s nonstop attacks.

“For crying out loud, 10 years, interest rates have been below the inflation rate, which means zero money market costs. It’s been a boon like never before to speculators. It’s done nothing for Main Street.”

The only problem our economy has is the Fed. They don’t have a feel for the Market, they don’t understand necessary Trade Wars or Strong Dollars or even Democrat Shutdowns over Borders. The Fed is like a powerful golfer who can’t score because he has no touch – he can’t putt!

Lastly, Stockman blasts Trump’s economic spending. He believes the US is in its last months of business growth and that raising the budget deficit at the top of a “business cycle” will only deliver “bad results.”

“He’s conducting a war on the nation’s solvency with a fiscal policy that is more out to lunch than anything I’ve seen since 1970.”

The title of Stockman’s new book, “Peak Trump: The Undrainable Swamp and The Fantasy of MAGA,” says it all about the Republican heavyweights view on the party’s current leader. But Trump continues to go about the US economy with a veritable sledgehammer of his own self-belief.

…..But if a fair deal is able to be made with China, one that does all of the many things we know must be finally done, I will happily sign. Let the negotiations begin. MAKE AMERICA GREAT AGAIN!

On trade, Trump calls himself the “tariff man,” sticking to his guns on tariffs and celebrating his progress in trade talks. Yet a study in November 2018 put the cost of tariffs per US household for 2019 at $2,400.

“It’s already baking some inflation into our system.”

Trump argues the border war, specifically his beloved wall on the US-Mexico border, will improve the lives of Americans and prevent crime. The longest government shutdown in history failed to get Trump the full wall funding he desired and may have reduced US GDP by billions, potentially more than Trump’s request.

And, of course, Trump believes he’s an expert on debt. But US national debt reached $22 trillion in recent weeks. That equates to $67,000 in debt per every American citizen.

Rather than Making America Great Again (MAGA), Stockman says Trump is steering the US economy toward something far more ominous: a historic recession that’s been held at bay for three decades.