David Luiz won the Champions League and Premier League title with Chelsea during two spells lasting over five years. The Brazilian defender’s unique look made him easy to spot on the field, and he was considered a fan-favorite among the Stamford Bridge faithful. This despite some glaring errors during his time.

Then new Chelsea manager and former team-mate Frank Lampard dumped him a month into his tenure as Blues manager. Three months into a new two-year contract that Luiz signed in May.

As Luiz and Arsenal prepare to return to Stamford Bridge, Arsenal sit tenth in the table, with one win from their previous five games. Chelsea currently occupies fourth spot, chasing Champions League qualification.

So happy to be here until 2021 !!! I love this club and I will always give my best for this shirt !! Thank you for all your support!! 💙💙💙 @ChelseaFC pic.twitter.com/g4Umq1v3Fd

Under former Chelsea manager Maurizio Sarri, Luiz claimed he was happy at the club. Putting his signature to a new two-year contract is evidence of that. He signed a three-year contract upon his return in August 2016 and could have walked away for nothing in the summer of 2019. Instead, he chose to remain.

The arrival of Frank Lampard changed all of that. 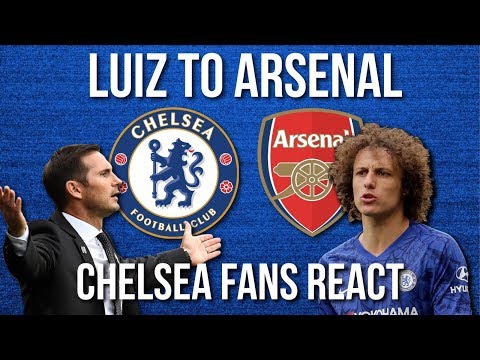 You can go back five years previously to see the first signs of tension between David Luiz and the future Chelsea manager. A Europa League defeat to Rubin Kazan had Lampard fuming with his teammate. A heated argument with Lampard jabbing his finger into Luiz’s chest occurred at half-time. This was a result of Luiz neglecting his defensive responsibilities.

Then-manager Rafa Benitez played the incident down afterward, but it seems the damage had been done.

According to British media, the situation between Luiz and Lampard escalated within a few weeks of the new manager coming through the doors at Stamford Bridge. Luiz was branded as a “disruptive influence.” As Chelsea’s opening game with Manchester United approached Luiz had been instructed to train apart from the first-team squad.

Welcome to The Arsenal, @DavidLuiz_4 😄

In an interview after his move, Luiz revealed insights into his abrupt Chelsea departure, stating:

It was an individual decision made through honest conversation – between me and Frank Lampard, no-one else. We had a different idea of the future of the game and that’s why I chose to take a new path.

In losing Luiz Chelsea not only lost a very good player, but also a man who was well-liked at the club. Luiz was an advocate and supporter of the Chelsea women’s team. He was always front and center at community events such as hospital visits. The Brazilian was often the last to leave the training ground due to his tendency to make time for everyone. Teammates, coaching staff, tea-ladies, and cleaners. David Luiz had time for all of them.

All of this will count for nothing of course when Luiz takes to the field at Stamford Bridge. Will his return to south-west London have a happy ending? Or will the coach who deemed him surplus to requirements, under pressure for failing to devise a plan B, have the last laugh?