Sites like College Humor and Cracked used to be pretty famous. Throughout the years these small websites grew into massive companies. In recent years however they’ve started to die off a little. First Cracked laid off their entire video team back in 2017 to reduce costs. Now College Humor is on its way down.

College Humor was owned by IAC, a holding company which also controlled other large websites. These include things like OkCupid, Tinder, and Vimeo. The reason that I used the past tense when referring to their ownership of College Humor is that they no longer do. Why? Because it wasn’t making them any money.

Unlike Cracked, who entirely abandoned video production, College Humor isn’t over yet. It was announced on Twitter that Sam Reich, CCO of College Humor, will now be the majority owner of CH Media. They will continue to release the content they have, and will then presumably scale back production to meet their expected revenue.

In the same Twitter thread, Reid admits that the company was not making a profit. Part of the reason for this can easily be seen on the channel itself. A lot of College Humor’s video output had high production values. Most videos on the channel require sets, effects, costumes, and multiple actors or extras.

The cost of these productions must be insanely high. On top of that, thanks to YouTube’s issues surrounding the ‘adpocalypse’ has almost certainly meant that a lot of these videos were being demonetized. So with high costs and reducing revenue, it was inevitable that something like this was going to happen. 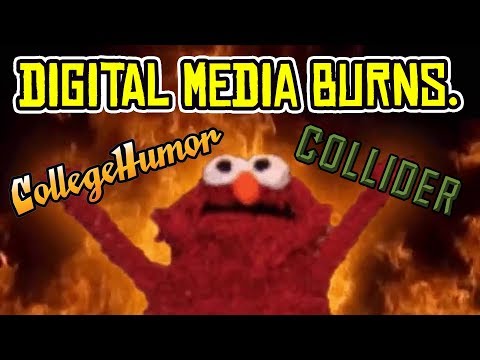 The big issue here, as it was with Cracked, is that these sorts of productions are now too expensive. While it was possible to sustain highly expensive productions back when ads worked correctly it has since become too risky and unprofitable to try productions at this scale. In some cases, YouTube channels have seen a loss of 85% of their revenue.

The only way that these channels can survive is to slim down. As YouTube trends towards more ‘family-friendly’ content, smaller-scale comedy production teams become more efficient. Surviving on the few videos that do remain monetized, plus any extra sources of income such as merchandising and Patreon.

The only way that College Humor, and sites like it, have a chance of surviving is to adapt. As the internet becomes more and more legitimate in the eyes of the world regulation is only going to get harsher and harsher. College Humor will need to become sleek, small and efficient. Either that or completely abandon video entirely just like Cracked did.