The U.S. stock market dropped by 0.75% during the after-hours trading session after China’s retaliatory actions. Beijing ordered the U.S. to close down its consulate in Chengdu, as U.S.-China relations continue to deteriorate.

The response from China comes after the U.S. State Department requested China to shut down its consulate in Houston.

Strategists have warned throughout the past month that additional geopolitical risks could cause a downturn in the stock market.

The Dow Jones Industrial Average (DJIA) fell by 1.31% on Thursday. As it awaits a 200-point fall at the opening, the Dow prepares for a 2% drop within two days.

Hu Xijin, the Global Times editor-in-chief, claimed U.S. Secretary of State Mike Pompeo is stoking tensions between China and the U.S. toward an “epic confrontation.”

The statement comes after Pompeo encouraged its allies to change the behavior of China.

In a speech, Pompeo bluntly described the government of China as a “new tyranny.” He criticized Beijing for going against “international hands” that helped the nation. 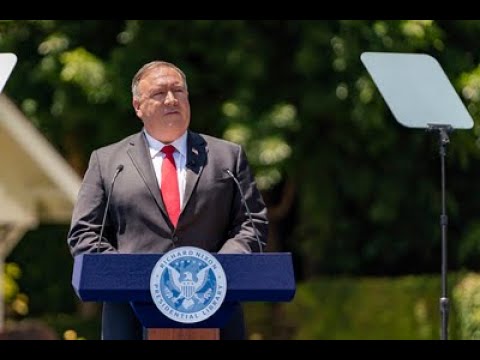 After the speech and the order to close the U.S. Chengdu consulate, both U.S. and Chinese stock market indices dropped.

The SSE Composite, the main stock market index in China, fell by 3.86% on fears of an intensifying U.S.-China relationship.

As President Trump has made very clear, we need a strategy that protects the American economy and, indeed, our way of life. The free world must triumph over this new tyranny. The truth is that our policies — and those of other free nations — resurrected China’s failing economy, only to see Beijing bite the international hands that were feeding it.

In recent months, tech stocks drove the U.S. stock market up to new highs. But investors fear that stocks are becoming too expensive relative to earnings and revenues.

Some strategists, like Canaccord Genuity LLC’s Tony Dwyer, said that any pullbacks would likely be temporary. He cited macro factors, along with relaxed financial conditions and high liquidity, as the main reasons.

While many fear the current environment is like the 2000 ‘dot com’ bubble, the macro backdrop suggests otherwise. The very different macro backdrop vs. 1999 suggest any pullbacks should prove temporary.

For now, investors fear the rapidly declining U.S.-China relations could act as a catalyst for a steeper downtrend.

The Fed has already implemented an aggressive fiscal policy backed by large back-to-back stimulus deals. It is uncertain whether there is enough “ammo” in the Fed to prevent another correction in the market.

Disclaimer: This article represents the author’s opinion and should not be considered investment or trading advice from CCN.com. The author holds no investment position in the above-mentioned indices.