The Liechtensteinische Post AG office in Vaduz ― the capital of Liechtenstein ― launched the crypto exchange service on February 15.

“Nothing is different from the conventional money-exchange business, which has always been part of Swiss Post’s service offering. The customer receives a physical cryptowallet ― which allows him by means of public and private keys ― activation of the crypto box in the network.”

After an introductory phase, customers will be able to exchange fiat money into other cryptocurrencies, including Ethereum, Litecoin, Bitcoin Cash, and Ripple.

Liechtenstein (population: 37,800) is among the most crypto-friendly nations in the world. In June 2018, Liechtenstein introduced the Blockchain Act.

The purpose of the Blockchain Act is to make the 25-kilometer principality a crypto hub for institutional investors. In Liechtenstein, a blockchain business can set itself up without opening a bank account. Moreover, the country’s leading financial institution, Bank Frick, accepts crypto directly.

In February 2018, Crown Prince Alois told CNBC that he believes that investing in bitcoin will help his family restore their wealth. He’s also exploring using blockchain to manage the day-to-day administration of the monarchy.

In Europe, Asia, and the United States, there is a crypto war brewing over dominance of the emerging digital economy.

In December 2018, two members of the French Parliament urged the government to invest up to 500 million euros in blockchain programs to elevate France as a “blockchain nation.”

To this end, Deputies Jean-Michel Mis and Laure de La Raudière outlined 20 proposals to promote the mainstream adoption of blockchain.

“2019 will be the year of the blockchain in France,” Jean-Michel Mis said. “This 10-year technology is moving out of the experimental stage into industrial implementation. The public will see the emergence of its uses in their daily lives.”

Similarly, Laure de La Raudière urged France to capitalize on the technology before China and the United States beat them to the punch.

“France must have a conquering philosophy on this subject. I’m sounding the alarm: It is time to invest. We must accelerate with French and European public money.”

In the United States, congressmen Warren Davidson and Darren Soto introduced the Token Taxonomy Act in December 2018. The TTA is a bill to exempt cryptocurrencies and ICOs from US securities law.

Davidson said the “light-touch” legislation would provide regulatory clarity to the crypto market. It would also ensure that the US remains competitive in the burgeoning industry.

“We need a light-touch regulatory framework that provides certainty for the ICO market,” Davidson told CNBC in June 2018. 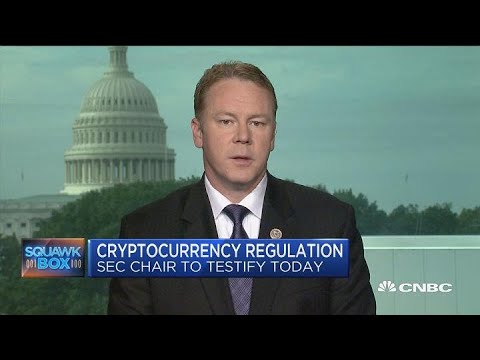 In a statement, Rep. Warren Davidson said it’s important to avoid overly restrictive laws that would stifle innovation and put the United States at a competitive disadvantage.

“In the early days of the Internet, Congress passed legislation that provided certainty and resisted the temptation to over-regulate the market. Our intent is to achieve a similar win for America’s economy and for American leadership in this innovative space.”

“This bill provides the certainty American markets need to compete with Singapore, Switzerland, and others who are aggressively growing their blockchain economies.”

“Virtual currencies and the underlying blockchain technology has a profound potential to be a driver of economic growth. That’s why we must ensure that the United States is at the forefront.”