Tech billionaire Tim Draper is unfazed by the recent bitcoin crash, and insists that the global economy will soon transition to crypto.

In fact, Draper boldly predicts that crypto will eventually overtake fiat money to make up two-thirds of the world’s total currency value.

The Silicon Valley venture capitalist said the shift will be inevitable once it becomes easier to spend and invest using cryptocurrencies.

Crypto Is ‘Global and Frictionless’

Forward-thinking countries realize that the transition is on the horizon, which is why some are already trying to make the switch now, Draper observed.

“That’s why you’re seeing the smaller countries all say, ‘Yeah, we want bitcoin, we want initial coin offerings here, we want blockchain. We want all of these things in our country,'” he noted.

Draper is an unapologetic crypto evangelist who stands by his bullish $250,000 bitcoin price target for 2022, as CCN.com reported.

Short-term market setbacks do not unnerve him the way they do to crypto investors with short-term, day-trader mindsets.

Draper said crypto is a game-changing revolution. And, as French novelist Victor Hugo once noted, nothing can stop an idea whose has time.

“I tend to move my dollars into bitcoin, because why would I want this currency that’s tied to some political force when I have a currency that is going to be frictionless and global?” Draper asked.  “I would much rather have a global currency than one that is sort of tied to a political force.”

While cryptocurrency bears are running for the exits because bitcoin prices are plummeting, Draper is doubling down. In fact, he wants to launch a bitcoin venture fund.

“Eventually, I want to be able to raise a fund that is all bitcoin, invest it all in bitcoin into a bunch of different companies, and have them pay their employees and suppliers all in bitcoin,” Draper mused. “And then no accounting fees, and it’s done automatically.

“And it’s all built into smart contracts, so that if one of those companies gets sold, I push a button, it just shoots into all of their bitcoin wallets.”

Earlier this month, Draper revealed that he’s still holding the entire bitcoin stash he acquired in late-2014, when he purchased about 40,000 bitcoins at a federal auction for $600 apiece.

“This is a new society, and you want to get out in front of it,” Draper said at the 2018 Web Summit in Lisbon, Portugal (video below). 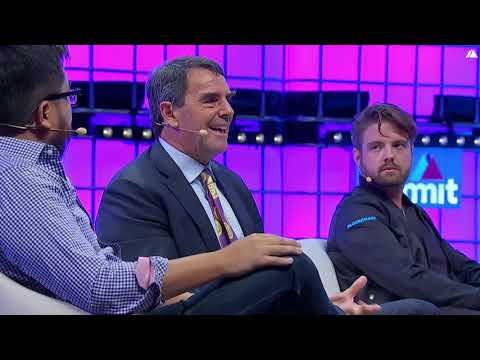 Throughout the crypto market’s meteoric spikes and recent downturn, Tim Draper has steadfastly remained a vocal proponent for virtual currencies and blockchain.

In fact, he’s confident that the industry’s market capitalization will soar to $80 trillion by 2023, as CCN.com has reported. Draper said crypto will inevitably undergo its share of ups and downs, but the market will continue to forge ahead.

“The Internet started in the same way,” Draper recounted. “It came in big waves and then it kind of came crashing down. And then the next wave comes concentrated but much bigger. I suspect the same thing will go on here.”