Robert Kraft — the billionaire owner of the New England Patriots — is facing up to a year in jail, a $5,000 fine, and 100 hours of mandatory community service for allegedly soliciting prostitution at a Florida massage parlor in January 2019.

Kraft, 77, has pleaded not guilty to the two misdemeanor charges. He will be arraigned on April 24 in Palm Beach County Court.

However, Kraft will not be required to attend the proceedings in person since the arraignment is a routine procedural hearing.

Prosecuting Robert Kraft Is a Waste of Resources

The chances of Kraft being sentenced to jail are slim because he has no prior criminal record, and his “crime” was a nonviolent misdemeanor.

That said, it’s absurd that a 77-year-old widower is being hunted by the law because he allegedly paid for a “hand job” and oral sex at a massage parlor.

Aronberg even hyped the operation as akin to “modern-day slavery,” even though authorities say the masseuses were not held against their will and could have walked out anytime.

No One Has Been Charged With Trafficking

Meanwhile, no one has been charged with human trafficking in this over-publicized local sting.

Moreover, there’s no evidence that Robert Kraft knew that the massage therapists he allegedly solicited could theoretically have been trafficking victims.

Prosecuting a mild-mannered septuagenarian does not make the streets any safer for you or me. In fact, most people would agree that police resources are better spent pursuing violent criminals such as murderers, rapists, and child molesters.

Kraft’s haters are gleefully wallowing in schadenfreude over his legal woes, but his arrest spotlights a bigger issue — which is that prostitution should be legalized. Research suggests that this is actually better for the women who do sex work. 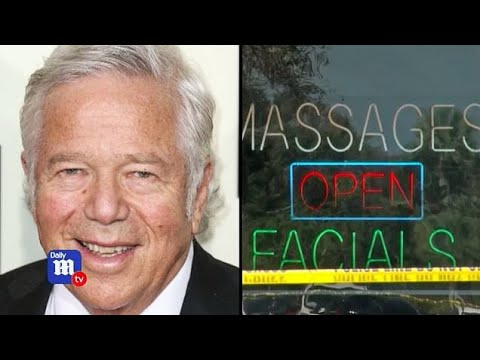 In the United States, Nevada is the only state where prostitution is legal. However, statistics suggest that paid sex work occurs in every state.

Despite the ban, more than 1 million people engage in sex work in the United States, according to ProCon. Worldwide, there are over 40 million working prostitutes. The vast majority of sex workers (80%) are female, and 90% of them depend on a pimp.

If sex work were decriminalized, prostitutes wouldn’t need pimps, who often steal their money and physically abuse them. Keep in mind that government bans on prostitution and alcohol consumption have not eradicated these behaviors.

Perhaps not surprisingly, more men than women support decriminalizing sex work, according to a 2016 YouGov poll.

Other proponents of legalizing prostitution include the United Nations, Amnesty International, and Human Rights Watch.

They say it is time to decriminalize sex work because doing so will help these women by making the sex trade safer, improve their access to healthcare, and curb human trafficking by violent cartels.

According to Amnesty International, a staggering 70% to 95% of prostitutes are sexually assaulted. And more than 60% are raped. But few ever report the crimes for fear of being arrested.

In June 2018, Human Rights Watch filed a lawsuit seeking to decriminalize sex work. They argue that keeping prostitution illegal means these women have to suffer the consequences of working in the shadows.

“Criminalization leads to horrible abuses, including police rape, police corruption, and women being unable to report crimes – including sex trafficking – because they fear arrest. Criminalization also obstructs access to healthcare.”

Prostitutes are far less likely to get tested for sexually transmitted infections because they’re afraid to tell healthcare workers what they do for a living.

By decriminalizing the sex trade, prostitutes would have the same protections as any other worker. So they could feel free call police for help and seek medical care without worrying that they might end up in jail.

Human Trafficking In New Zealand Vanished After It Legalized Prostitution

Studies suggest that decriminalizing sex work could dramatically improve the lives of the women who are forced to do this, according to public-policy research group the Independent Institute:

“After legalizing prostitution in 2003, New Zealand found ‘no incidence of human trafficking.’ Moreover, legalization made it easier for sex workers to report abuse and for police to prosecute sex crimes.

Researchers studying prostitutes in Canada, India and Kenya found that legalizing sex work could decrease HIV infections by 33% to 46%.”

No one is arguing that prostitution is an ideal job that anyone would ever aspire to. But for those individuals who are forced to do it for lack of better alternatives, decriminalizing the profession could be a big step toward improving the quality of their lives.