Apple (NYSE:AAPL) has announced a 4-for-1 stock split as part of its third-quarter results. Apple claims the split will make the stock more accessible to retail investors, but it has the side-effect of reducing its weighting in the Dow Jones.

The move will cut the price of Apple stock to a quarter of what it was before. With fractional share trading already popular among users of Robinhood and other platforms, you can already buy a quarter of its stock for a quarter of the price.

The split is, therefore, little more than a marketing trick. It will boost Apple’s market cap in the days before the split, but it will also have the negative effect of reducing Apple’s weighting in the Dow Jones, something that will impact the benchmark’s returns.

Watch: Apple Splits its Stock for Some Robinhood Action 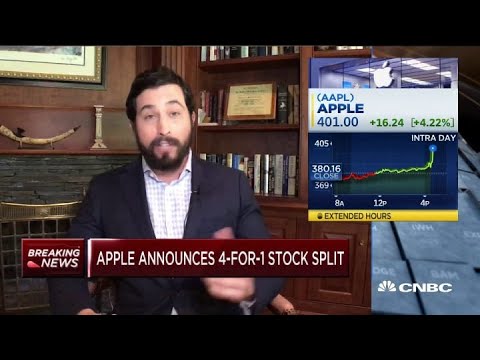 Four Pieces of Apple Stock Are Better Than One?

American companies used to love splitting their stocks. Over 100 firms listed in the S&P 500 executed a stock split in 1998. Less than ten did so in 2019.

Apple is the one company bucking this trend. It posted its Q2 results Thursday, revealing an annual revenue increase of 11%. It also announced that it would split its existing stock at the end of August.

Each Apple shareholder of record at the close of business on August 24, 2020 will receive three additional shares for every share held on the record date, and trading will begin on a split-adjusted basis on August 31, 2020.

Apple claims that the split will “make the stock more accessible to a broader base of investors,” but it doesn’t work out that way.

For starters, Apple’s stock has already jumped on the news. If AAPL keeps rallying at the pace we’ve seen in 2020, it will price many casual traders out of the market.

Besides, trading platforms such as Cash App already allows retail investors to buy fractional shares of companies. They’ll be able to do the same after Apple’s stock split, spending the same money for the same fraction of total outstanding shares.

Impact on the Dow

The Apple stock split is really about marketing. It’s a bullish move: the tech giant is declaring that it’s confident its stock will keep rising. Such a prospect excites the market.

The market is also excited about the opportunity to receive three additional Apple shares. Traders will rush to buy for the period leading up to August 24. This will likely pump Apple stock.

So, the split is great for Apple. It makes itself seem “democratic” and “egalitarian” by splitting its shares, yet all it’s doing is pumping its overall market cap.

The stock splt also reduces Apple’s weighting in the Dow Jones. Apple currently trades higher than the other 29 Dow components, and the split will push it somewhere to the middle.

This may weaken the Dow’s performance relative to the S&P 500, which weights companies according to market cap. By giving a weaker signal of growth, the Dow Jones may potentially seem more bearish.

The overall effect may be subtle, but this could impact investor sentiment. At a time of high uncertainty, sentiment needs to be protected.