Apple surpassed $2 trillion in market cap. The iPhone maker’s rally could be just starting because its Chinese market is beginning to boom.

Apple surpassed $2 trillion in market capitalization on August 19, buoyed by optimistic Q2 sales and investor confidence in tech. The iPhone maker’s rally could be just starting because its Chinese market is beginning to boom.

First, the demand for iPads and Macbooks are rising in China. Second, many iPhones in China are nearing an upgrade. Lastly, the firm’s dominance in the wearables market supplement iPhone and iPad sales.

Throughout 2019, analysts said that phone makers, including Apple and Samsung, have to find ways to offset plateauing smartphone growth.

Since the latter half of last year, the tech giant has targeted various fast-growing sectors to diversify its business.

By the end of 2019, Apple dominated the tablet and wearables market, complementing the growing demand for MacBooks.

Tim Cook, the CEO of Apple, attributed the success of iPads and MacBooks to its Q2 record sales. He explained:

“We also continue to see extremely high new customer rates on Mac and iPad there. To give you a perspective, about three out of four customers that are buying the Mac are new in China and about two out of three that are buying the iPad are new. And so these are numbers that we’re super proud of.”

The conglomerate’s all-around strength across various sectors solidified its image as an efficient money-making firm.

“This crisis has strengthened what was already a strong hand.”

The performances of Apple, Amazon, and Microsoft further fueled the momentum of “Big Tech” and their impact on the U.S. stock market.

Factor #2: Many iPhones in China Are Reportedly Nearing Upgrades

According to the researchers at Morgan Stanley, there is a significant iPhone upgrade potential in China.

Around 68% of iPhone devices are said to be more than two years old. The average lifespan of a smartphone is about 2.5 years. Some analysts estimate iPhones to last more than four years.

As most iPhone users in China near an upgrade, it could boost the iPhone’s sales in the region. Morgan Stanley analysts said:

“In our view, this speaks to the significant iPhone upgrade potential in China, the largest in at least 4 years, and helps support our bullish call that iPhone shipment growth can meaningfully accelerate in FY21 (fiscal year 2021).”

One consistent theme that supplements the rising demand for Apple’s flagship products, like iPhones and iPads, is wearables.

The AirPods series and Apple Watch have seen a noticeable increase in demand since late 2019.

In December of last year, Bernstein’s Toni Sacconaghi estimated the AirPods to evolve into the firm’s third-biggest product by 2021.

Apple became the first U.S. company to hit a $2 trillion market cap. Watch the video below. 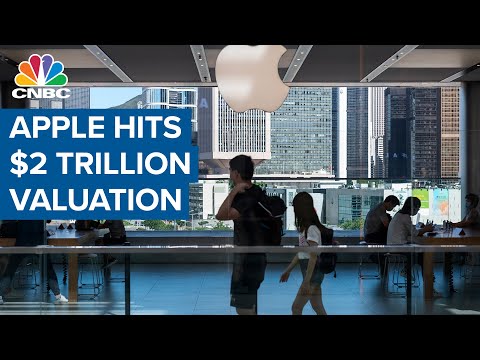 The compatibility of AirPods and Apple Watch with the company’s core products supplement the positive sales figures coming from iPhones, MacBooks, and iPads.

Apple became the first company to surpass $2 trillion in valuation in the U.S., but its revenues are still rapidly growing across numerous industries.