By CCN.com: Ridesharing powerhouse Uber Technologies (NYSE: UBER) announced last week that it expects to lose $1 billion in its first-ever quarterly earnings report this Thursday. Uber gave shareholders only a week to prepare for the report, and they will be eagerly anticipating Thursday evening’s results.

The shortened week ahead has little else in the way of earnings after the Memorial Day long weekend in the U.S. Meanwhile, revenue is anticipated in a range of $3.04 billion to $3.10 billion vs. $2.5 billion in Q1 2018. Its ridesharing business is expected to grow by 20%, while Uber Freight and Uber Eats will more than double from a year ago.

Delighted to share this moment with the drivers and delivery-partners that changed the way the world moves. pic.twitter.com/2SZxIjdBbs

Ridesharing is a Roller Coaster Business

The company’s IPO has been nothing short of a roller-coaster ride, echoing the sentiments of one rival ridesharing business. Lyft is currently around 35% lower than its listing price, leaving investors to wonder whether Uber will follow it down.

Expect uncertainty ahead as investors grapple with figuring out just how to value a fundamentally new type of business. The trouble with this approach is that we’re in uncharted territory. As it stands, the play is more of a gamble than an investment.

Along with its ridesharing cousin, Uber is banking on autonomous cars to drive future revenue growth. Its driverless division is reportedly valued at $7.25 billion. When, and more importantly if, it ever comes online, Uber hopes save on one of its core revenue costs – drivers. Lyft made the controversial post-IPO decision not to disclose how much it pays its drivers. It remains to be seen whether Uber will follow suit.

That drawcard is luring investors in. But with stiff competition from the likes of Google, Tesla, BMW, and others, will it pay off? Nobody knows. Legislation on driverless technology is still in the pipeline, and consumers are certainly not yet ready to put their lives in the hands of autopilots. Regardless, some analysts are optimistic about the stock and believe there’s another 10% up from here. 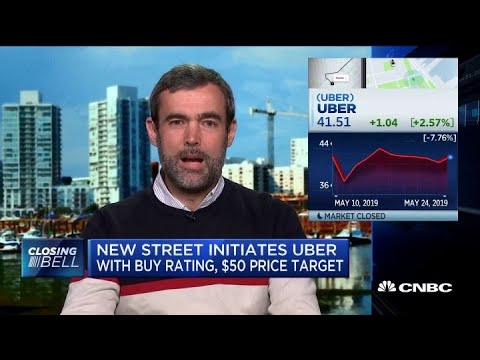 Losing Is the New Winning

In a rather bizarre new model of building businesses, it appears that posting massive losses is the path forward to delivering shareholder value. Amazon has pulled that feat off with great success thus far. In fact, some analysts believe the hands-in-all-pies business is primed to hit $5 000 by 2025.

Uber, on the other hand, along with a whole host of new companies is looking to duplicate that success. And the number of unicorns on the list just keeps growing:

"15 tech unicorns that went public over the past three quarters: Put these companies altogether in a pot, and they’d make one enormous, money-losing super-unicorn, with more than $25 billion in annual revenue coupled to more than $6 billion in losses" https://t.co/JRg0s5QHzD pic.twitter.com/VwhFuJki3Z

Uber has not revisited its opening price of $45 since listing and fell by almost 20% in a matter of days following the IPO. Volatility is low ahead of the results with a flag formation providing no real hints as to the next move. There is plenty of potential for a breakout on either side.

In a rather humorous and fitting schedule for the rest, earnings will be pretty chilled. Only a few companies are reporting including a number of cannabis stocks. As CCN.com recently reported, here are three high-flying options with huge potential gains.