Shaquille O’Neal has single-handedly put the down-and-out pizza franchise Papa John’s on a better road to success. He and Papa John’s execs announced a bevy of partnerships on Friday, including O’Neal taking a seat on its board.

Shaq’s moves show he’s as savvy a businessman as he is a champion NBA player. Few saw this coming, except execs at Papa John’s, whose stock has been under considerable pressure for years due to myriad factors.

We’ll see over the long run if Shaq can help it regain better financial footing, but in the meantime, it’s going to be fun to watch.

You know @SHAQ as a Hall of Famer, sports commentator and entrepreneur. Today, we're adding "Papa John's board member and investor in Atlanta stores" to his long list of pursuits. His business savvy and passion for our pizza make him a great fit.

In what is akin to a three-point shot, Shaq first grabbed a seat on the pizza restaurant chain’s board. Second, his addition facilitated the pizza chain entering into a marketing agreement with the NBA champion. He will serve as the company’s brand ambassador.

Third, O’Neal will invest in nine Papa John’s restaurants in the Atlanta area.

Eating and Investing His Way to Success

Many are used to seeing O’Neal in the General Auto Insurance and Icy Hot commercials. Others are used to seeing him trade basketball jabs on TNT with Charles Barkley and Kenny Smith. Like silly kids sometimes, their jokes can leave you in tears, and them too.

It seems odd that the jester/NBA legend now holds a seat on a major corporation’s board, but think about this. When it comes to food, the 7’ 1’’ and roughly 325-pound O’Neal isn’t just devouring it. He’s investing in it.

O’Neal owns a Krispy Kreme Doughnuts franchise in Atlanta. Southerners know that when that light is on at the legendary doughnut shop, delicious hot treats are ready.

There’s something the champ invests in that he can’t eat, but it’s close to his heart. He’s a minority owner of the Sacramento Kings NBA franchise.

Papa John’s will be one of the NBA legend’s first major board seats. He was drawn in not for the pizza, but from his understanding of the importance of corporate diversity.

Chairman Jeff Smith said the company is naturally thrilled to partner with O’Neal. 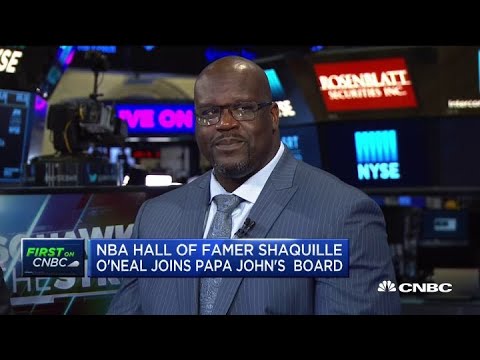 Investors smelled more than freshly baked pizza on the news. They sent Papa John’s up four percent during pre-market trading. The stock closed up about six percent, which is even more impressive considering the Dow closed down 460 points.

Shaq made it clear that he approached the Papa John’s team about partnering in some manner. He was aware of the public relations debacles the firm had due to the company’s founder’s penchant for using the “n-word.”

John Schnatter used the derogatory word during a media training exercise. When asked how he would distance himself from racist groups, Schnatter reportedly complained that KFC founder Colonel Sanders got away with referring to African-Americans in a derogatory way all the time.

Schnatter quit soon after that.

O’Neal, who noted he was the first African-American to be appointed to the Papa John’s board, said:

I was worried about the 800 franchisees and how they were affected by the comment.