Mike Pence will attend a fundraiser hosted by QAnon supporters, indicating that the Trump team has resorted to encouraging conspiracies.

Vice President Mike Pence will attend a fundraiser in Montana next week hosted by supporters of the QAnon conspiracy theory. The hosts — Caryn and Michael Borland — have previously shared QAnon-related posts on social media, and have also donated over $220,000 to Donald Trump’s reelection campaign.

In attending the event, Pence follows in the footsteps of Trump, who has previously spoken positively of QAnon followers.

Yet by tacitly endorsing the QAnon conspiracy theory, both men have shown that the Trump administration has nothing left. They’ve proven that they can’t defend their leadership by pointing to facts and evidence, but only by encouraging a baseless conspiracy theory which claims that Satan-worshipping, pedophilic deep-state Democrats are out to get them.

It’s not only Mike Pence who will be attending the Montana fundraiser next week, but also senior officials from Donald Trump’s campaign.

They will be hosted by the Borland’s. Both Caryn and Michael Borland have made their Twitter accounts private, although Michael’s profile picture features an obvious QAnon meme.

Other Twitter users have been able to screenshot posts Michael Borland has retweeted. These include a post claiming the reality of “Pizzagate,” which is the theory that high-level figures are running a pedophile ring.

Seeing as how the fundraiser is being hosted by paid-up QAnon conspiracy nuts, the attendance of a big chunk of the Trump team pretty much means that Trump is at least okay with the conspiracy. He and Pence may not have approved the specific claims it makes, but by associating with — and even approving of — QAnon supporters, they provide it with oxygen.

Donald Trump has repeatedly praised QAnon supporters while refusing to comment on whether he believes the theory. He did this on August 14, when he sidestepped a question on QAnon in order to praise a Republic congressional candidate who herself has promoted the theory.

He did something very similar on August 19, when he used a press conference to commend the theory’s supporters. 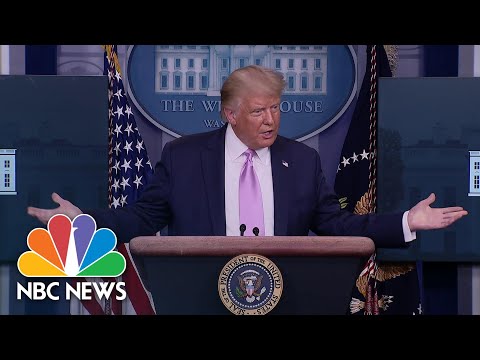 By “appreciating” the QAnon “movement,” Trump is effectively approving of its claims. He approves of the people involved in spreading the conspiracy theory, which for all intents and purposes has the same effects as approving of what they do. And what do they do? They claim that opposition to Trump is part of some sinister conspiracy.

Nothing Left But Conspiracies And Falsehoods

Trump’s approval of QAnon supporters gives them the confidence and incentive to continue promoting outlandish claims. But it also shows just how politically and morally bankrupt the Trump administration is.

Instead of defending his record with reliable data on jobs, incomes, health outcomes, educational attainment levels, and so on, his administration instead chooses to encourage an irrational and illogical conspiracy. Because that’s all it can do.

Trump has very little to actually show for his presidency, so he would rather claim that all opposition to him is somehow orchestrated by the Illuminati, or the Lizard Men. But his cozying up to QAnon may end up being one step too far for floating voters come November.

‘America’s Dad’ Tom Hanks Is Cheating on the U.S. – And We Deserve It

What Is Qanon? Here Are 5 Core Beliefs of the Shocking Conspiracy Theory

Someone Rescue Chrissy Teigen from This Insane Alt-Right Conspiracy