Nvidia investors got a nasty surprise this morning when the chipmaker announced its Q4 fiscal 2019 earnings could come in $500 million short of original estimates.

While Nvidia has repeatedly blamed its financial woes on a decline in cryptocurrency mining-related demand in the past, it’s acknowledging that it’s baby — the gaming industry — remains a significant problem.

The chipmaker dropped its guidance to $2.2 billion from $2.7 billion, and the news sent its share price into a tailspin. 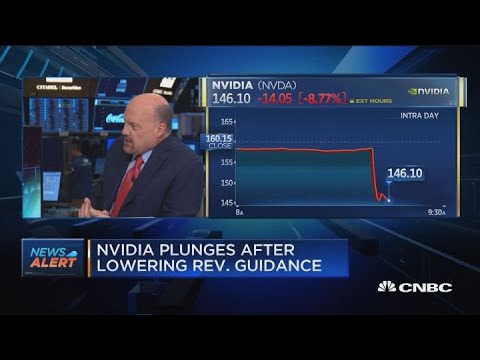 Nvidia blames weaker-than-forecasted sales of its gaming and data center platforms for the guidance cut. Deteriorating growth in China and macroeconomic issues also caused the revenue drop, according to the company.

“Q4 was an extraordinary, unusually turbulent, and disappointing quarter,” he continued. “Looking forward, we are confident in our strategies and growth drivers.

The foundation of our business is strong and more evident than ever – the accelerated computing model NVIDIA pioneered is the best path forward to serve the world’s insatiable computing needs. The markets we are creating – gaming, design, HPC, AI and autonomous vehicles – are important, growing and will be very large. We have excellent strategic positions in all of them.

CCN.com previously reported that the chipmaker had shelved its focus on processor chips for the cryptocurrency mining market. It’s looking to robotics and artificial intelligence for future success. Toward this end, the firm has opened a 13,000 sq. ft. robotics research lab in Seattle. The lab will have 20 roboticists, as well as 30 academic experts.

In the meantime, it’s also dealing with a class action lawsuit. Nvidia’s stands accused of making misleading statements about the impact of reduced cryptocurrency mining-related demand on its revenue projections.

Nvidia was one of the best-performing stocks in 2017 as crypto miners flocked to the chipmaker for its GPUs. Jim Cramer weighed in on Nvidia’s predicament this morning on CNBC. He pointed out that in Q3 fiscal 2019, Nvidia indicated that gaming was bigger than crypto.

[Nvidia] could not get a handle on how much [cryptocurrency] inventory they had.

Cramer added this news is going to affect all players in the gaming space.

At the time of writing, NVDA shares were down almost 20%. The firm reports earnings on Feb. 14.