CBS’ hit sitcom Mom may be doomed in the wake of series lead Anna Faris’ sudden decision to leave the show after seven seasons.

After seven years of stellar ratings, Chuck Lorre’s hit sitcom “Mom” is in serious trouble. On Friday, Deadline and multiple other outlets reported that Anna Faris — who has led the show alongside Allison Janney — has made the surprising decision to leave the series.

Per reports, Faris and Janney were both in two-year contracts that had been signed last spring and subsequently secured Mom’s renewal through its eighth season, ending in 2021. Nevertheless, Faris appears to have opted out, leaving Janney as the sole lead in a show that was buoyed by the relationship between their two characters.

But where will the series go from here? Down, is the likely answer.

Since it premiered in 2013, Mom’s focal point has been the dysfunctional relationship between mother Bonnie Plunkett (Janney) and her adult daughter, Christy (Faris).

Although the show has explored a myriad of other significant themes, including teen pregnancy, cancer, rape, obesity, and mental health — and somehow made it all funny — the relationship between those two characters (and/or the interplay between two of the best working actresses today) has been the heart and soul of the program.

That’s no slight to Mimi Kennedy, Jaime Pressly, Beth Hall, or any of the other talented people who have helped make Mom a success, either. Faris is just in another realm as a comedic actor, while one could make the case that Janney is one of the greatest thespians of her generation.

Here she is accepting an Emmy award for her work on the series in 2015: 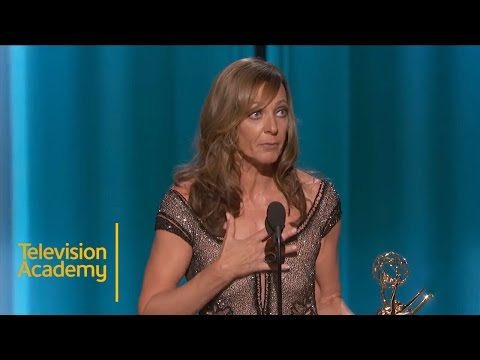 However, while Janney is more than capable of carrying a highly-regarded, long-running sitcom on her own, fans don’t usually react well to dramatic shifts in a program’s key dynamic this late in the game. The diehards will always give something new or different a chance, but even their willingness to invest their time will be tested.

Another Two and a Half Men?

Such was the case when Charlie Sheen left another Chuck Lorre/CBS joint — “Two and a Half Men” — in 2011. That show had been one of the highest-rated programs on network television thanks in large part to the endlessly entertaining, odd-couple relationship between Sheen’s Charlie and Jon Cryer’s Alan, brothers who were opposites in almost every respect.

When Sheen went bananas and was essentially fired from the show, not even the addition of Ashton Kutcher — who was on fire at the lime as a legitimate Hollywood A-lister — could keep it on the same level. Ratings remained solid and even experienced a boost initially. Still, there was a clear decline in overall viewership over time as the Charlie-Alan dynamic was replaced with Alan and Alan’s college buddy, who buys his and Charlie’s house.

Shows can evolve and change — and must do so if they wish to remain relevant — but when they take 90-degree turns and become something different entirely in no time flat, it tends to turn even longtime fans off. Two and a Half Men may have lasted four more seasons in its diminished capacity, but it carried significantly more clout than “Mom” does.

Hopefully, “Mom” can manage a smoother transition, and Janney can lead the show in an exciting, new direction. Unfortunately, Anna Faris may have just secured the show’s ultimate demise.

#ExposeCBS Puts an Ugly Stain on the Network’s Crumbling Reputation