By CCN.com: Given his touchy-feely attitude with women, former Vice President Joe Biden probably thinks of himself as something of a lady’s man. Not everyone agrees.

Nevada Democrat Lucy Flores is one of several women claiming that Biden touched her repeatedly without permission. While angered about what she called an “inappropriate” encounter, she says Biden has exhibited an “incredibly disrespectful” attitude by joking about the string of accusations against him.

On a Monday night segment of Fox News, Flores recalled a time in 2014 when Biden “touched her shoulders from behind,” kissed her on the head, and smelled her hair. Flores was also critical of the long history “powerful men” have of allegedly mistreating women and getting away with it, saying:

“That is unprofessional, inappropriate behavior, no matter who does it. We’re talking about the fact that, as women, we have had to endure this kind of behavior on behalf of powerful men certainly for as long as I’ve been alive – you know, forever.”

Social norms are changing. I understand that, and I’ve heard what these women are saying. Politics to me has always been about making connections, but I will be more mindful about respecting personal space in the future. That’s my responsibility and I will meet it. pic.twitter.com/Ya2mf5ODts

Biden says he doesn’t remember meeting Flores. After several women came forward to share their stories regarding his past conduct, Biden stated in a video that he’ll “be more mindful” of people’s personal space. Days later, however, the former VP joked to electrical workers that he had been given “permission” to hug the union leader who introduced him. Flores isn’t taking too kindly to Biden’s sense of humor.

But the Nevada state lawmaker isn’t the only one who seems to find Biden revolting. A new poll has emerged claiming that Biden’s favorability among Democratic voters has slid by approximately 7%. Meanwhile, Biden is expected to announce his candidacy this week and has begun reaching out to donors.

Ironically, seven women have come forward to accuse the former VP of inappropriate touching. That’s 1% for every accuser. Among them, former White House intern Vail Kohnert-Yount says Biden introduced himself to her in the White House basement, grabbed her by the back of the neck, and held his forehead against hers as he spoke. 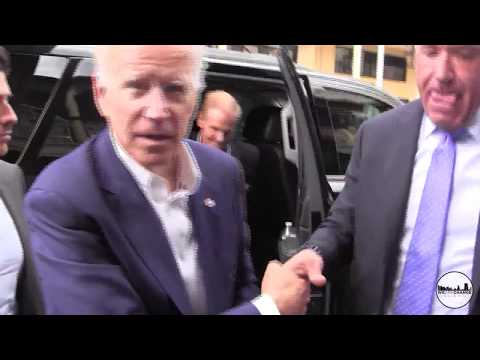 Biden was recently heckled about his history with “senators’ kids” after footage was shown on C-SPAN that appears to show him rubbing his nose against a young girl’s hair, then leaning in for a light kiss.