Ford launched a video today of its “all-electric F-150 prototype.” The truck is capable of towing more than 1 million pounds, which the company proved by using its prototype to pull nearly a dozen “double-decker freight cars” filled with other F-150 trucks. Even though Ford’s truck isn’t ready yet, the company didn’t hold back and showed it off to the world including Elon Musk.

The Tesla CEO no doubt is watching from the sidelines, as his electric pickup truck is set to make its debut very soon. Meanwhile, the Tesla electric truck can reportedly tow 300,000 pounds, which is several times less power than Ford’s electric truck. Ford, of course, knows this and took a veiled shot at Elon Musk in the video, reportedly saying:

“[Our electrick truck is] far beyond any production truck’s published capacity.” 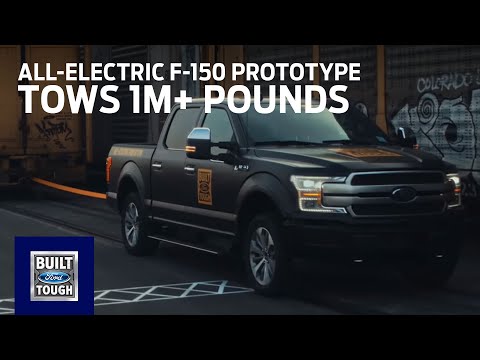 Elon Musk asked for it when he recently declared that Tesla’s version of an electric pickup truck would “be a better truck than an F-150 in terms of truck-like capability.” Ford took the bait and is trying to prove him wrong. When it comes to pickup trucks, Ford has the edge because it is has been making pickups for decades. Ford’s chief product development officer told Yahoo Finance:

“We have dominated this segment, it’s the best-selling truck for 42 years. We think combining Built Ford Tough with electrification exemplifies all of those attributes customers love. We want to build on the leadership we have had.”

Whatever Elon seems to lack in horsepower, however, he makes up for in ingenuity and design. This is where Elon shines, in everything from space travel to electric vehicles, and Ford is going to have a tough time beating him on that front. Elon has already reportedly thrown around terms like “sci-fi” to describe his electric pickup truck, something Ford engineers only see in the movies. He seems to want to strike a balance between a Porche 911 and Ford F-150, as reported by electrek.

Meanwhile, Ford might want to keep in mind that Elon Musk is also the CEO of SpaceX, the company that sends rockets into space. It probably wouldn’t take much for him to add enough horsepower so the Tesla electric pickup truck pulls as much if not more weight than Ford’s. In fact, if Elon is playing his cards close to the vest, it might already do this.

At the end of the day, competition in the pickup truck space will benefit customers who not only will have more choices but who could see a pricing war unfold.