By CCN.com: Hackers who paralyzed Florida’s Riviera Beach City’s IT infrastructure are about to laugh all the way to the bank. This is after the Riviera Beach City Council voted to authorize the city’s insurer to meet the ransom demands of the hackers who planted ransomware in the city’s computer systems. The hackers have been demanding 65 bitcoins, worth over $606,000 at the current bitcoin price, per The Palm Beach Post.

Perhaps as an indication of the urgency of the matter, the council voted unanimously in two minutes the board to authorize the payments. The city will fork out about $25,000 to cover the deductible. 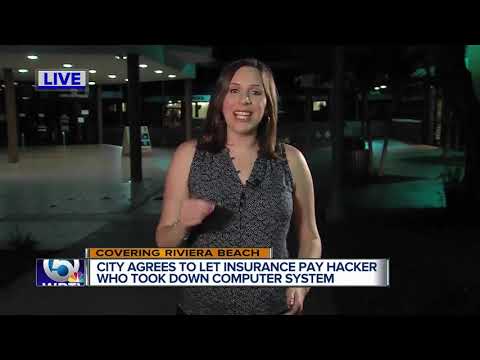 The ransomware attack started towards the end of last month. It has been traced to the opening of an infected email attachment by an employee at the city’s police department. Essential services such as email were knocked offline.

The city has had to resort to a manual workaround to make payments to vendors and to accept payments for utility services.

And the bill keeps growing…

The hefty bill of over $600,000 in bitcoin is not the only expense that Riviera will incur though following the ransomware attack. Earlier this month the Riviera Beach City Council authorized a payment of $941,000 for the purchase of new computer hardware.

The city has also hired consultants for undisclosed costs. This could bring the total costs incurred from the ransomware attack to well over $1.5 million.

While the city’s acting IT manager had revealed to the council that email services and the city’s website are now operational, the website seems to have gone offline again.

Other cities said no to paying bitcoin to hackers

Such ransomware attacks on vulnerable cities are growing in number. Riviera, however, stands out for agreeing to pay bad actors. Other cities such as Baltimore have previously declined to meet such bitcoin ransom demands. This is on the grounds that the hackers might not honor their word after receiving their payment.

In the case of Baltimore, hackers had been demanding a bitcoin ransom that was translating to about $80,000. Citing the advice of the FBI and the Secret Service, the city declined to pay. Additionally, city officers expressed doubts that paying a ransom would completely rid the city’s computer systems of the malware. Baltimore’s Mayor Jack Young had also implied that paying the bitcoin ransom would have meant rewarding criminal behavior.

However, this came at a great cost to Baltimore. As previously reported by CCN.com, the total costs required to recover from the ransomware attack is likely to go beyond $18 million. This includes $10 million for funding the full recovery of the compromised IT hardware and software. The city also lost millions of dollars in revenue while its computer systems were paralyzed.