Lawyers for Tesla’ CEO Elon Musk have accused the U.S. Securities and Exchange Commission of ‘unprecedented overreach’ and violating the constitutional rights of the iconic billionaire.

Musk’s legal team was responding to an SEC request to have the court hold Musk in contempt, according to Reuters. This was for violating a settlement he reached with the commission in September.

Specifically, Musk’s legal team argued that the electric carmaker’s CEO had complied with the settlement terms. Additionally, the legal team stated that Tesla had implemented a policy to ensure Tesla communications containing material information are pre-approved:

The Securities and Exchange Commission’s request that Musk be held in civil contempt for a single, immaterial tweet that dutifully complied with the Order and with Tesla’s ‘Senior Executives Communications Policy’ is incorrect on the facts and on the law.

Tesla’s CEO Tweets get him in Trouble Again

The SEC’s contempt charge arises from Musk’s tweet sent out in February which contained material information.

According to the SEC, the tweet mentioning an annual production figure of half a million cars was inaccurate. Musk must have realized this even before the SEC filed a contempt of court charge against him. This is because he corrected himself later in the day saying the 500,000 estimated production rate was actually the annualized production rate the electric carmaker estimates to reach by the close of this year.

In the filing, Musk’s legal team added that Musk’s reduced Tweet volume after the settlement was indicative of his compliance:

This self-censorship is reflective of his commitment to adhering to the Order and avoiding unnecessary disputes with the SEC.

Is the SEC Baiting Musk?

If past tweets are anything to go by, Musk does not hold the SEC in high regard. Last October he derided the body referring to it as the Shortseller Enrichment Commission.

Just want to that the Shortseller Enrichment Commission is doing incredible work. And the name change is so on point!

While his social media controversies have been a source of amusement for some, they have been migraine-inducing for Tesla investors. Worryingly though, some legal experts believe that the SEC is closely watching Musk waiting for his next misstep. According to securities attorney Britt Latham it’s just a matter of time before the next violation proves fatal:

They are building their case. If they get a violation here, they could get the court to issue an order that puts some more teeth into the consequences of the next violation. Then at some point, given how unpredictable Mr. Musk is, the agency may assume he will hang himself and give them the opportunity to really take some more serious action.

What Next for Musk?

With the latest scuffle with the SEC, some securities attorneys have already predicted Musk might get suspended or fined.

Recently, TV stock picker Jim Cramer went on record calling for the ouster of Musk. This was with regards to his SEC comments. Last year in December Cramer said Musk is ‘his own worst enemy’. According to CNBC, Cramer also speculated that the Tesla CEO thinks he’s above the law. 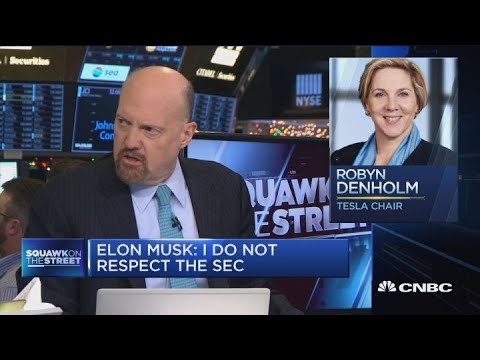